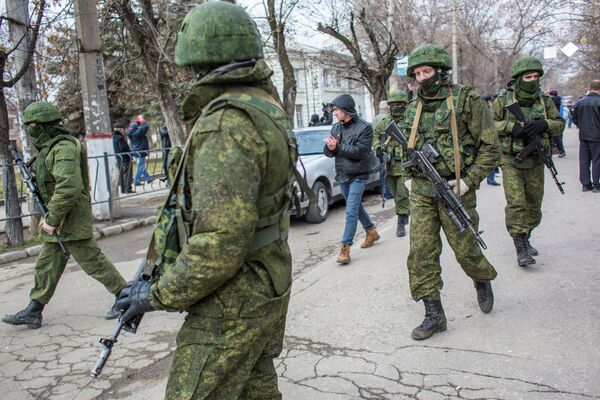 Seven of the eight powerful governments that make up the G8 bloc denounced member nation Russia on Monday for its actions in Ukraine and froze preparations for a June summit due to be hosted by the Russian city of Sochi.

MOSCOW, March 3 (RIA Novosti) – Seven of the eight powerful governments that make up the G8 bloc denounced member nation Russia on Monday for its actions in Ukraine and froze preparations for a June summit due to be hosted by the Russian city of Sochi.

Canada, France, Germany, Italy, Japan, the United Kingdom, the United States, the European Council and the European Commission all signed a joint statement that criticized Russia’s “clear violation of the sovereignty and territorial integrity of Ukraine.”

Russian troops in unmarked uniforms have been taking control of strategic sites across Ukraine’s southern peninsula of Crimea since Thursday, and the Russian parliament approved a request from President Vladimir Putin to move troops into Ukraine on Saturday.

“We call on Russia to address any ongoing security or human rights concerns that it has with Ukraine through direct negotiations and/or via international observation or mediation,” the G7 statement said. “We note that Russia’s actions in Ukraine also contravene the principles and values on which the G7 and the G8 operate.”

International diplomacy has been stepping up in recent days as tensions over Ukraine rise.

US Secretary of State John Kerry described Russia’s deployment in Ukraine as an act of aggression during NBC’s “Meet the Press” show on Sunday, and threatened the Kremlin with economic isolation.

There were calls over the weekend for Russia to be formally excluded from the G8, which it joined in 1997, but Germany’s Foreign Minister Frank-Walter Steinmeier said that Berlin does not support such a move because it would cut off a direct channel of communication with the Kremlin.

Russian Foreign Minister Sergei Lavrov is due to meet with Ban Ki-moon on the sidelines of a United Nations session in Geneva on Monday, the Foreign Ministry said.

The efforts of world leaders, however, appear to have had little success in curtailing the Russian military presence in Ukraine with Russia reportedly ramping up its efforts to disarm Ukrainian military units in Crimea.

After her call with Putin, Merkel told Obama by telephone that the Russian leader was “in another world” and out of touch with reality, The New York Times reported, citing US officials.

The incoming government in Kiev has described Russia’s actions as an invasion, while putting the Ukrainian army on high alert and calling up all military reserves.