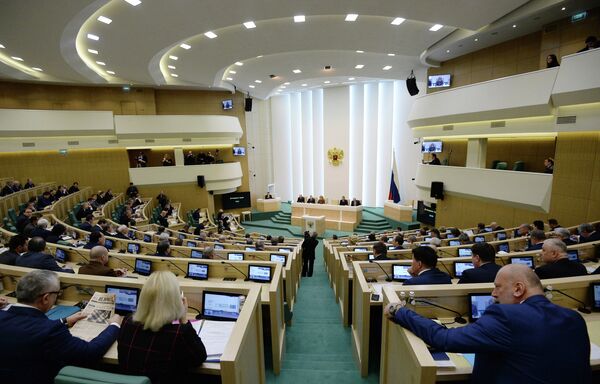 Russia’s upper house of parliament unanimously approved a request from President Vladimir Putin on Saturday to deploy military forces in Ukraine in a move that could escalate a confrontation in the Crimean peninsula.

MOSCOW, March 1 (RIA Novosti) – Russia’s upper house of parliament unanimously approved a request from President Vladimir Putin on Saturday to deploy military forces in Ukraine in a move that could escalate a confrontation in the Crimean peninsula.

Putin issued his request in response to what he said was a threat to the lives of Russian citizens and military forces located in naval bases in Ukraine’s southern peninsula of Crimea.

All 90 Senators present in the 116-member Federation Council voted in support of armed action.

Ukraine’s interim President Oleksandr Turchynov told US Secretary of State John Kerry that he considered Russia’s conduct a “direction act of aggression against the sovereignty of Ukraine.”

Turchynov said he expected assistance from Ukraine’s strategic partners in resolving the standoff. EU foreign ministers are due to meet Monday to discuss the fast-developing situation.

The move by the Federation Council comes amid reports of large Russian troop movements in Crimea and a week after opposition parties swept to power in Kiev when ousted President Viktor Yanukovych suddenly fled the city.

Russian troops will remain deployed until the “political-social situation in the country is normalized,” the Kremlin said in a statement requesting the intervention.

The exact size of any planned deployment is not yet known, but Federation Council Senator Viktor Ozerov said after Saturday’s vote that the decision on how many troops could be involved would be taken by Putin.

Federation Council Senators lined up during an extraordinary session to express their support for armed intervention.

Much of the focus of debates in the upper house was on the seizure of power by opposition groups last week, which marked the culmination of three months of anti-government protests ignited by Yanukovych’s decision to back away from a planned deal to enhance economic and political ties with the EU.

Lawmakers accused the United States and European countries of open support for violent protesters in Ukraine.

Deputy Speaker Yury Vorobyov said protesters in Kiev were trained in Poland and Latvia with US money and that if Russia did not intervene militarily it would be tragedy for the Ukrainian people.

The head of the migration service’s citizenship department, Valentina Kazakova, said 143,000 people had applied for asylum in the last two weeks of February alone.

“People are afraid for the fate of those close to them and are asking not just for protection, but also to help them receive fast-tracked Russian citizenship,” Kazakova said. “A large number of applications are from members of Ukrainian law enforcement bodies and government officials fearing reprisals from radically disposed groups.”

The vote follows a wave of pro-Russian protests in southern and eastern Ukraine, as well as calls from the newly elected prime minister of Crimea for Putin to intervene.

Russian officials have claimed that an armed group was dispatched to Crimea’s administrative center, Simferopol, from Kiev to storm the headquarters of the local Interior Ministry.

"During the attempted capture of the Interior Ministry building in Crimea there were injuries, there are victims. There is intimidation and threats, people are in this situation naturally gravely concerned for their life, for their own safety and that of their families,” said Federation Council Speaker Valentina Matviyenko. “This forced the government of Crimea to turn to Russia for assistance."

Ukraine’s UNIAN news agency cited police in Crimea, however, as denying any attempt to seize the Interior Ministry building had taken place.

Beyond serving as the strategic location of Moscow’s Black Sea Fleet, Crimea is home to a large ethnic Russian community, which has reacted with alarm to what it sees as the aggressively nationalistic government that has taken hold since last month’s overthrow of President Yanukovych.

Further complicating matters, around one-tenth of the peninsula’s population is comprised of traditionally Muslim ethnic Tatars, who have made a public show of coming out in support of the interim government.

The ratcheting up of Russian rhetoric over Ukraine and widespread reports of the presence of Russian troops already maneuvering on Ukrainian soil has provoked outrage in Kiev and condemnation from world leaders.

US President Barack Obama said Friday that he was deeply concerned about Russian troop movements, and warned that violations of Ukraine’s sovereignty would be deeply destabilizing.

British Foreign Minister William Hague announced after the Federation Council vote that the Russian ambassador in London had been summoned for consultations.

"We oppose [the] decision to deploy Russian troops on Ukrainian soil against wishes of [Ukraine's government] and condemn any act of aggression," Hague wrote on his Twitter account.

Hague is due to travel to Ukraine on Sunday for talks with officials in Kiev.

The interim Ukrainian government has said Russia is trying to provoke conflict, and have called on the Kremlin to withdraw all soldiers back to Russian naval bases on the Black Sea coast.

Vladimir Klitschko, a former boxing champion who was a prominent leader in the protest movement, called on interim President Oleksandr Turchynov to demand that the UN Security Council immediately convene an extraordinary session.

He also called on parliament to declare full mobilization over what he described as “aggression against Ukraine.”

Steven Pifer, a veteran diplomat who served as US Ambassador to Ukraine in the 1990s, wrote on Twitter that Moscow’s declared intent to launch military action was in violation of a treaty signed by Russia, the United States, Britain and Ukraine in 1994.

“As one who helped [negotiate the] 1994 memorandum, [there is] no doubt in my mind that Russia is violating its commitments,” Pifer wrote.

US Senator John McCain, who addressed hundreds of thousands of protesters in Kiev last year, tweeted Saturday that the Russian parliament's decision was "straight out of [the] Soviet playbook."

The threat of military intervention has been only one strand in a campaign of pressure by Moscow against an incoming Ukrainian government that the Kremlin has refused adamantly to acknowledge.

On Saturday, state energy giant Gazprom indicated it was likely discontinue discounts on gas exports to Ukraine, a development that would spell disaster for Kiev’s cash-starved coffers.