Subscribe
Euronews television channel swiftly pulled a picture of a vandalized Soviet-era military memorial from the head of its Facebook page Tuesday in the latest incident to highlight heightened Russian sensitivity over perceived disrespect for World War II monuments.

The French-based channel, which was set up by the European Broadcasting Union, of which Russia is a member, on Monday posted the Reuters news agency photograph showing a monument of Soviet soldiers in Bulgaria’s capital, Sofia, that had been illegally daubed in yellow and blue paint.

The vandalistic act appeared to be a tribute to an anti-government uprising that last week led to the toppling of the Moscow-friendly president in Ukraine, whose national flag is composed of those colors.

Euronews’ decision to make the photograph of the painted soldier its Facebook cover photo drew swift criticism from Russia’s Foreign Ministry, which had already appealed to Bulgarian authorities to investigate the attack on the statue.

A Foreign Ministry statement said Euronews had “crossed a line” by using the picture.

After hastily changing the cover photo, Euronews said in a statement that the image “was in no way an expression of support for one side or another in Ukraine, not to mention an act of vandalism.”

The photograph simply reflected current events in the world, the channel said.

Russia has condemned the unrest in Ukraine, describing it as the work of violent extremists intent on seizing power.

Earlier this month, US news channel CNN was pressured into issuing a formal apology for including a Soviet war memorial in Belarus on an irreverent list of the world’s ugliest monuments. 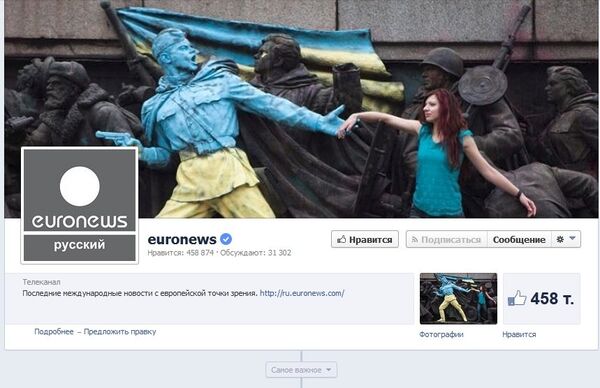 Russia’s Foreign Ministry said the list had “defiled the memory of those who died in the war against Nazism.”

The Soviet Union’s role in the Allied victory in World War II is heavily relied on by Russian authorities to instill a sense of pride and patriotism among the population, with ever bigger anniversary parades and ceremonies.

Last year, parliamentary deputies considered a bill making it illegal to criticize the actions of the Red Army during World War II. Despite the fervor of sentiments aroused by the issue, the legislation was not adopted.

In 2007, one person was killed and several more injured in riots in the Estonian capital Tallinn over plans to move a statue of a Red Army soldier from the center to a cemetery outside the city.

The statue’s move, which many interpreted as an intended slight against the Baltic nation’s sizable ethnic Russian minority, soured diplomatic relations between the two nations for several years.