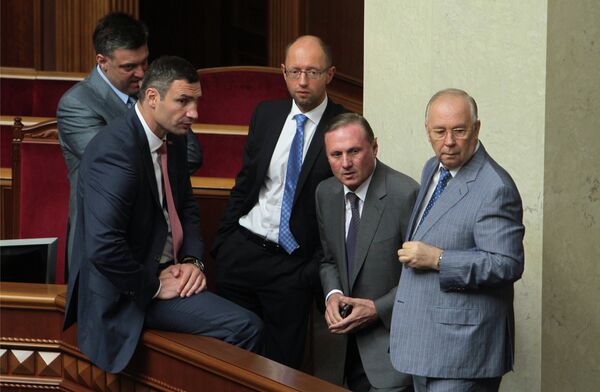 Speaking from a location in his political stronghold in the east of the country, however, Viktor Yanukovych defied attempts to unseat him, describing them as a coup.

In the same session of parliament, deputies voted to hold early presidential elections on May 25.

After overwhelmingly voting to force Yanukovych’s removal as president, deputies in the Verkhovna Rada broke into a rendition of the national anthem.

The impeachment vote marks a dramatic development for a leader’s whose rule had seemed in little doubt in late November, when a wave of protests was ignited by the government surprise decision to back away from closer ties with the EU in favor of greater economic cooperation with Russia.

But Yanukovych insisted in a televised statement before the vote Saturday that he would neither resign nor sign any agreement with what he called “bandits terrorizing the country.” 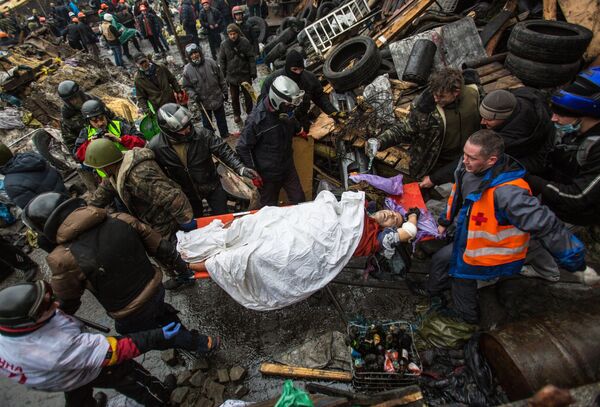 Protesters carry an injured comrade during a clash with riot police in Kiev
© RIA Novosti . Andrei Stenin
/
Go to the mediabank

The remarks were a defiant rejection of calls by the opposition for the president to step aside and potentially set the stage for destabilizing political confrontation in the days ahead.

“I’m doing everything to prevent bloodshed in the country,” Yanukovych said in a televised interview. “They are trying to intimidate me and induce me to resign voluntarily. But I do not intend to resign.”

In the statement broadcast on Ukrainian television, Yanukovych said the ongoing turmoil in Ukraine had all the hallmarks of a coup attempt and likened opposition forces’ activities to those of the Nazis in the 1930s.

Lawmakers from Yanukovych’s fast-disintegrating Party of Regions earlier in the day gathered in the eastern city of Kharkiv to declaim the opposition and resolved that rule in the regions should be taken over by local government, a clear gesture of planned defiance to the order taking shape in Kiev.

Combative remarks by speakers at that congress have aroused alarms of further violence and a possible surge in separatist sentiments in a region that has bristled at a perceived increase in Ukrainian nationalism.

Also Saturday, parliament voted to release former prime minister Yulia Tymoshenko from jail in a session that also saw the appointment of a new Interior Minister and the dismissal of the country’s top prosecutor.

Avakov will be replacing outgoing Interior Minister, Vitaly Zakharchenko, who the opposition charge with being responsible for the crackdown on government opponents that culminated in violence this week in which at least 80 people were killed.

Another Tymoshenko ally, Alexander Turchinov, was approved as speaker of the parliament, replacing a close Yanukovych associate.

A day earlier, parliament voted to approve a key opposition demand by restoring the 2004 constitution, designed to limit presidential powers and make Ukraine a parliamentary republic. The deal overseen by EU envoys and Kremlin-appointed mediator stated that an interim government should be formed in the coming days.

The agreement between the government and the opposition coincided with the withdrawal of riot police from an area in downtown Kiev where most government buildings are located, including the parliament, the Cabinet of ministers and the presidential administration.

With the disappearance of police presence in central Kiev, protesters freely roamed around the government district Saturday and also invaded the grounds of Yanukovych’s palatial country residence outside the city.

Televised images of the opulent Yanukovych residence, which houses a vast automobile collection, a pet zoo and a golf course, is likely to cause ill-feeling in nation scourged by unemployment and poverty, and where average monthly salaries are around $400.

Although the discontent that erupted last year was at first focused on the about-face move on EU ties, rallies took on a more general anti-government quality, calling for the president’s ouster and early elections.

The months-long demonstrations have seen occasional outbursts of violence between radical protesters and police, but the scale of bloodshed of the past few days marked an escalation that provoked international outrage and forced authorities to mediate a negotiated solution to the unrest.

Authorities say around 80 people have died, although opposition parties believe the real number may be much greater. The Health Ministry said Saturday more than 600 were injured over five days of fighting.

Authorities and opposition traded accusations over who instigated the round of violence that erupted Tuesday after a crowd marched toward parliament intent on storming the building.

An uneasy truce was called Wednesday, only to be shattered early the following day. Dozens were killed Thursday, mainly from gunshot wounds.

Opposition figures accuse security forces of firing on protesters, while the authorities maintain the increasingly well-armed and aggressive anti-government movement attempted to mount a violent seizure of power.