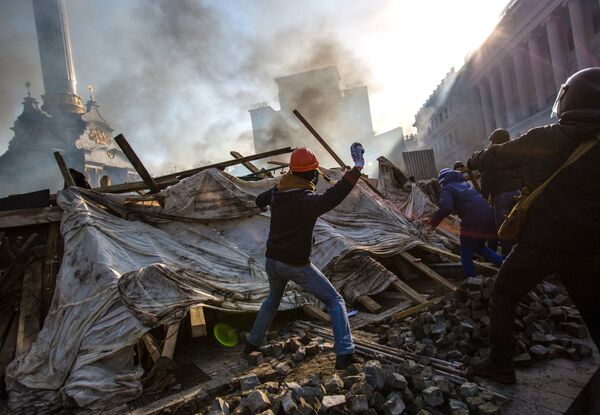 Countries across the world issued condemnations Wednesday of fatal violence in Ukraine as Russia and the European Union clashed over who was to blame.

KIEV, February 19 (RIA Novosti) – Countries across the world issued condemnations Wednesday of fatal violence in Ukraine as Russia and the European Union clashed over who was to blame.

The EU’s foreign policy chief Catherine Ashton announced that EU foreign ministers would hold an extraordinary meeting in Brussels on Thursday to discuss a response, with options on the table including sanctions against individuals considered responsible for the bloodshed.

At least 25 people died in a day of fighting between anti-government protesters and riot police in the center of the capital Kiev as the authorities continued their attempts to dismantle a protest camp in the city.

"It was with shock and utter dismay that we have been watching developments over the last 24 hours in Ukraine,” European Commission President Jose Manuel Barroso said in a statement.

“It is the political leadership of the country that has a responsibility to ensure the necessary protection of fundamental rights and freedoms.”

“As a result of the criminal activity of radical elements from the opposition, last night saw bloodshed in Kiev and a series of other Ukrainian cities,” the Russian Foreign Ministry said in a statement.

“We do not see any clear response from European politicians and structures, who refuse to admit that all the responsibility for the actions of radical elements inside Ukraine lies with the opposition.”

The Kremlin views the actions of the Ukrainian opposition as an attempt to seize power by force, Russian President Vladimir Putin's spokesman said Wednesday after confirming that Putin spoke by telephone to Yanukovych on Tuesday evening.

The United States called on both sides to de-escalate the crisis. Geoffrey Pyatt, the US ambassador to Ukraine, warned on his Twitter feed that those fuelling violence could be targeted with sanctions.

US Vice President Joseph Biden telephoned Yanukovych overnight to express his “grave concern regarding the crisis” on the streets of Kiev, the White House said in a statement.

Pope Francis also raised the subject of Ukraine at an audience Wednesday in the Vatican, during which he said that he would be praying for the victims.

“I call on all sides to cease violence and start the search for peace,” the Pontiff said.