US Accuses Russia of Leaking Diplomat Conversation on Ukraine 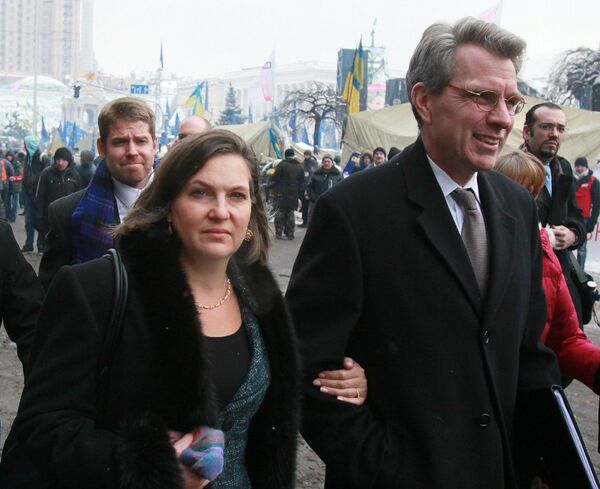 Washington has accused Russia of being behind the leak of an intercepted telephone call between top US diplomats discussing the unfolding political crisis in Ukraine and using foul language to disparage the EU.

WASHINGTON, February 7 (RIA Novosti) – Washington has accused Russia of being behind the leak of an intercepted telephone call between top US diplomats discussing the unfolding political crisis in Ukraine and using foul language to disparage the EU.

In the recording, figures identified as US Assistant Secretary of State Victoria Nuland and US Ambassador to Ukraine Geoffrey Pyatt discuss political developments inside the former Soviet nation and coordinate on contact with opposition figures.

In a passage that has already caused embarrassment to Washington, Nuland can at one stage be heard to dismiss European partners with the phrase “f—k the EU.”

While the conversation, which was reproduced on YouTube, is scant on operational details, it will likely be used to fuel Russian allegations of direct Western support for Ukraine’s opposition.

A post on Twitter by an aide to Russian Deputy Prime Minister Dmitry Rogozin about the recording shortly after it surfaced online has prompted accusations from Washington that Moscow was directly implicated in the interception and subsequent leak.

"This is a new low in Russian tradecraft in terms of publicizing, posting,” State Department spokeswoman Jen Psaki said Thursday. “This is something they've been actively promoting, posting on, tweeting about, and certainly we feel that represents a new low."

Psaki said Nuland has been in contact with EU counterparts and apologized for her embarrassing remarks.

Rogozin’s aide, Dmitry Loskutov, has dismissed suggestions he was directly involved in a leak.

“I was just monitoring the Internet, while my boss was meeting with the Chinese leader,” he said.

Loskutov said his tweet was not an official statement.

Russia has repeatedly called for an end to what it says is interference by Western politicians in the internal affairs of Ukraine.