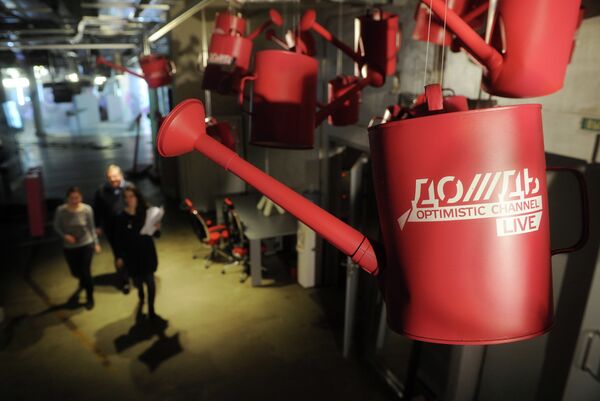 © RIA Novosti . Grigory Sysoev
/
Go to the mediabank
Subscribe
International
India
Africa
The Kremlin rights advisory body has asked prosecutors to check cable and satellite companies whether they violated the Constitution in dropping broadcasts of a liberal-leaning channel embroiled in a row over an opinion poll about World War II.

MOSCOW, January 31 (RIA Novosti) – The Kremlin rights advisory body has asked prosecutors to check cable and satellite companies whether they violated the Constitution in dropping broadcasts of a liberal-leaning channel embroiled in a row over an opinion poll about World War II.

An online poll by television Dozhd last weekend asked whether the Soviet Union should have surrendered the besieged city of Leningrad – now St. Petersburg – to the Nazis to avoid hundreds of thousands of deaths.

The survey was greeted by outrage from politicians and public figures, leading several telecommunications companies carrying Dozhd to hastily drop it from their roster of channel packages.

The head of the Cable Broadcaster Association, Yury Pripachkin, appeared to have prompted that rush to take Dozhd off the air by urging carriers to “exercise certain censorship functions.”

But the Kremlin rights council said in a letter to Prosecutor General Yury Chaika published online Thursday that the move violates the Constitution, the Russian media law and consumer rights.

Chaika has now been asked to run a check on the unofficial ban.

Prosecutor General’s Office had not commented as of Friday.

The Kremlin council, known for its outspoken position on rights violations by authorities, has no power to issue orders to state agencies, but can only make requests.

Prosecutors in St. Petersburg had earlier announced a check into what they called Dozhd’s “blasphemous” decision.

The channel is suspected of fanning hatred, which is punishable with up to two years in prison, a spokeswoman for prosecutors said.

Bans continued on Friday, with leading telecom operator Vimpelcom announcing a suspension of Dozhd broadcasts. No reason was given.

Vimpelcom, as well as other cable companies that blocked Dozhd, including industry leaders Rostelecom, Tricolor and Akado, did not comment on the possibility of prosecutor checks or censorship allegations.

The poll that triggered the ire of conservatives came on the eve of the 70th anniversary of the lifting of the 900-day Leningrad siege in 1944. Havng claimed up to 1.5 million deaths, mostly through starvation, the siege is considered the deadliest in history.

Dozhd management apologized for the poll, but said it was used as a pretext to shut down the channel, known for its criticism of the Kremlin and whistleblowing reports.