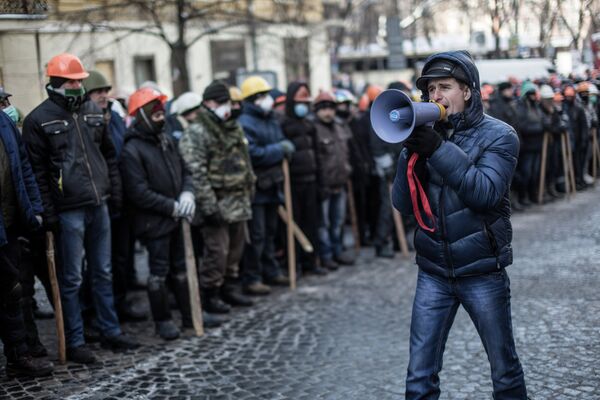 © RIA Novosti . Andrey Stenin
/
Go to the mediabank
Subscribe
International
India
Africa
Russia’s upper house of parliament on Wednesday called for an end to what it has called interference by Western politicians in the internal affairs of Ukraine

MOSCOW, January 29 (RIA Novosti) – Russia’s upper house of parliament on Wednesday called for an end to what it has called interference by Western politicians in the internal affairs of Ukraine.

The Federation Council in a resolution expressed “indignation at a number of Western politicians unceremoniously interfering … and consciously provoking destabilization in the country.”

Protests have been ongoing in Ukraine since the government decided in November to forgo the long-expected signing of association and free-trade deals with the European Union, opting instead for closer ties with Russia.

The protests turned violent earlier this month in the wake of Ukraine’s parliament hastily pushing through draconian laws curtailing the right to public assembly.

Criticism of foreign influence on events in Ukraine appeared to be a reference to visits to the Ukrainian capital, Kiev, by a number of top European and US politicians and diplomats.

In December, veteran US Senator John McCain addressed a crowd of anti-government supporters in Kiev, pledging broad US support for the pro-European movement. Earlier that same month, US Assistant Secretary of State Victoria Nuland visited the epicenter of the protest movement and handed out bread to demonstrators.

In its resolution, the Federation Council blamed opposition groups for the outbreak of violent protests, calling them a part of a “well-organized campaign to discredit and overthrow the legitimate government.”

“Pogroms and fire-raising in Kiev and other Ukrainian cities, the storming of an administrative building, aggressive actions against law enforcement officers that have led to deaths and a significant number of injured are occurring with the approval of those who have brought people to the streets,” the resolution said.

The legislature expressed “confidence that the brotherly Ukrainian people and their leadership will find a way to restore peace in the country.”

On Tuesday, anti-protest laws were rolled back and the prime minister tendered his resignation in an effort to appease the opposition and prevent further street clashes.