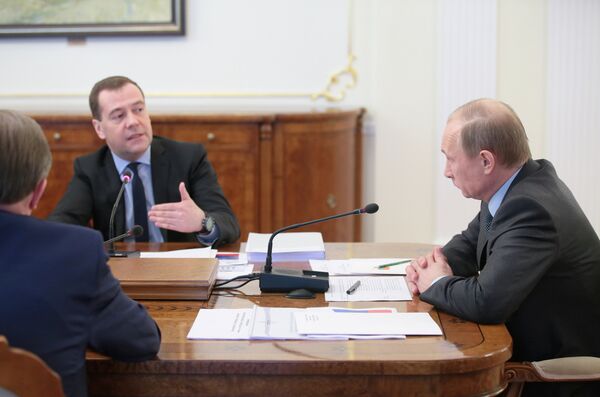 © RIA Novosti . Mikhail Metzel
/
Go to the photo bank
Subscribe
Russia warned Ukraine on Wednesday that it will halt the implementation of a financial aid package until the crisis-hit former Soviet nation has formed a new government.

KIEV, January 29 (RIA Novosti) – Russia warned Ukraine on Wednesday that it will halt the implementation of a financial aid package until the crisis-hit former Soviet nation has formed a new government.

Financial and energy agreements with Ukraine will only be honored when “we understand what sort of government there will be, who will be working in it and what rules they will stick to,” Prime Minister Dmitry Medvedev told the Cabinet on Wednesday, Prime business news agency reported.

“That’s sensible, let’s wait for the new Ukrainian government to be formed,” responded President Vladimir Putin, who was also present at the meeting, Prime reported.

Russia agreed to supply Ukraine with $15 billion worth of loans and slash the price for gas in a December deal that was widely seen as a political reward for Ukrainian President Viktor Yanukovych after his decision to back off from integration plans with Europe and cement closer ties with Russia.

Anti-government protests in Ukraine sparked by Yanukovych’s refusal to sign trade deals with the EU in November have escalated into street violence and led to up to five deaths in recent weeks.

In an apparent concession to the increasingly emboldened opposition movement, Ukrainian Prime Minister Mykola Azarov resigned Tuesday, triggering the fall of the government. The authorities also allowed the repeal this week of unpopular anti-protest laws pushed through parliament on January 16.

In another apparent warning to Kiev, Medvedev said Wednesday that delayed gas payments were still a problem despite the price cut ordered by the Kremlin last month.

“Even under the lower price they [Ukraine] are telling us that they can’t pay. This really changes the situation and should be taken into account when forming a relationship with the new government,” Prime quoted Medvedev as saying.

Russia has already supplied Ukraine with $3 billion of the promised $15 billion loan, and interim Ukrainian Prime Minister Sergei Arbuzov said Wednesday that he expected another $2 billion to be transferred “in the near future.”

Putin told reporters Tuesday that Russia would honor its obligations to Ukraine, which he said were designed to help ordinary Ukrainians, whether the opposition came to power or not.