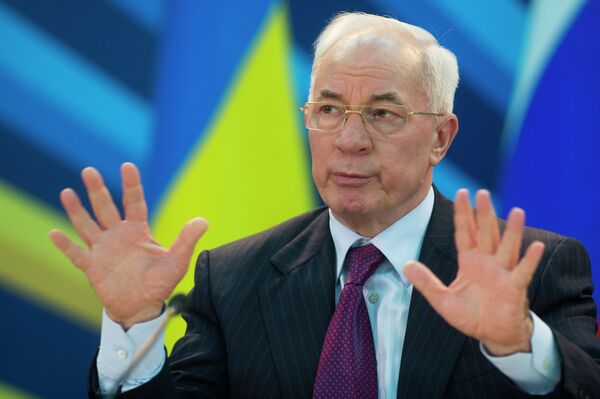 Ukrainian Prime Minister Mykola Azarov announced his resignation Tuesday in what he said was a bid to quell the deepening political crisis created by protests in the former Soviet nation.

KIEV, January 28 (RIA Novosti) – Ukrainian Prime Minister Mykola Azarov announced his resignation Tuesday in what he said was a bid to quell the deepening political crisis created by protests in the former Soviet nation.

The announcement came as lawmakers gathered for a special session of parliament to seek an end to the standoff that has paralyzed the political system since authorities took a surprise decision in November to back away from closer ties with the European Union.

But it was unclear early Tuesday afternoon whether Azarov’s decision to step aside would lead to a softening in the position of the emboldened opposition, which is demanding fresh elections.

“The acute and dangerous conflict for our people, for the fate of Ukraine, demands further responsible steps,” Azarov said in a statement posted on the Cabinet website.

“In order to create additional opportunities for social and political compromise, for the peaceful settlement of conflict, I have taken a personal decision to ask the president of Ukraine to accept my resignation,” Azarov said in his statement.

President Viktor Yanukovych accepted Azarov’s resignation, which also resulted in the dissolution of the Ukrainian government.
Azarov, who was appointed prime minister in 2010 by Yanukovych, was a key figure in the decision to pull back from closer ties with the European Union, a move that sparked the current wave of anti-government protests.

Azarov, who was appointed prime minister in 2010 by President Viktor Yanukovych, was a key figure in the decision to pull back from closer ties with the European Union, a move that sparked the current wave of anti-government protests.

Activists say up to five protesters have been killed since demonstrations turned violent on January 19 in the wake of a mass rally in the capital, Kiev, calling for the repeal of a package of draconian anti-protest laws.

Azarov, who was born in Russia and is often mocked by government opponents for his poor command of Ukrainian, is close associate of Yanukovych, whose successful presidential campaign he ran in 2010, and is an outspoken critic of the opposition movement.

The veteran 66-year-old politician has repeatedly accused opposition figures of trying to organize a coup, and last week described radical protesters in central Kiev as “terrorists.”

Azarov’s position had been undermined in recent days after the presidential administration confirmed that Yanukovych had offered Arseniy Yatsenyuk, a leader of the opposition Batkivshchyna party, the position of prime minister in an attempt to placate protesters.

Yatsenyuk, who rejected the offer, underplayed the significance of Azarov’s resignation.

"There should be a presidential decree, and in general, I'm not willing to discuss it," he told reporters in parliament.

Anna German, a deputy with ruling Party of Regions, said that the current uncertainty was the fault of the opposition’s refusal accept Yanukovych’s offer of government posts.

“We wanted it to be a coalition government. I think that this would have been right. But the opposition does not want, or cannot, take this responsibility upon itself,” German said.

An extraordinary session of Ukraine’s parliament repealed Tuesday a bundle of anti-protest laws pushed through the Rada in scenes of chaos on January 16.

The repeal of the the anti-protest legislation, which was criticized internationally and dubbed a “charter of oppression” by Amnesty International, followed a deal the authorities clutched with opposition leaders.

Justice Minister Olena Lukash said in a statement late Monday that less controversial laws will be passed again, while the rest will be invalidated after agreement between the major parties.

The original laws that were signed by Yanukovych stipulated 15-day jail sentences for those taking part in unsanctioned demonstrations and prison terms for those wearing helmets or masks during rallies, or erecting makeshift structures without approval from city authorities.

The measures also included new restrictions on Ukrainian NGOs apparently modeled on a similar law passed by Russia in 2012, restrictions on the Internet and harsher punishments for extremism.

Protesters have been in control of parts of central Kiev since Yanukovych’s decision to delay the signing of a trade deal with the EU and embrace closer ties with Russia.

EU foreign policy chief Catherine Ashton was due to arrive in Kiev on Tuesday evening for discussions with Ukrainian officials on the current political crisis.

Updated with quotes, background and edits throughout.