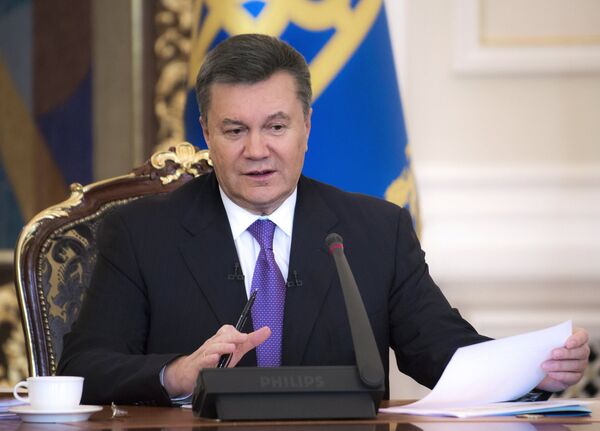 But Yatsenyuk said on the website of his faction in the Verkhovna Rada, Batkivshchyna, that opposition leaders are still undecided on the deceptively generous offer.

Protest leaders believe that Yanukovych wants to move the responsibility for a near-ruined economy to them, Yatsenyuk said.

The opposition said it will continue talks with Yanukovych, who has so far not budged on their main demand, snap presidential elections.

Yanukovych and the opposition nevertheless clutched some tentative deals, including for amnesty to protesters who fought police in the streets of Kiev in the past weeks.

But the president will only amnesty the opposition if they vacate all administrative offices they have taken over across the strife-torn country.

Unrest that started in Kiev has spread to engulf 13 of 27 Ukrainian regions that saw the same mass protests and attacks on governmental offices.

The trend prompted talks of Yanukovych’s slipping hold of the country and even possible partition of Ukraine into the pro-European, Ukrainian-speaking western regions and the Russian-speaking provinces that support Moscow.

Most recently, 41 people were arrested in the central Cherkasy Region on Sunday over a failed storming of the regional administration office on Thursday, local prosecutors said.

Yanukovych also agreed to consider amending the draconian laws curtailing the rights to public protest that he pushed through the parliament earlier this month, his office said.

The legislation prompted a spate of violence at the previously mostly peaceful protests in Kiev, ongoing since Yanukovych unexpectedly ditched a geopolitical alliance with EU for Moscow in November.

Violence resumed Saturday after a brief ceasefire, with protesters unsuccessfully trying to break through a police cordon around the governmental district in central Kiev.

Protesters, most of them ultranationalists, were back to pelting Berkut riot police on Hrushevskyy Street with Molotov cocktails and stones, including via a makeshift catapult.

A mob of several hundred also laid siege to the downtown Ukrainian House convention center, forcing some 200 police holed up there to retreat after a nighttime standoff.

The opposition captured two policemen on Friday, apparently intending to exchange them for detained activists.

Separately, Kiev prosecutors denied Saturday that one of the recent victims of the ongoing riots was shot dead with a police firearm.

At least five opposition supporters have been killed in the infighting so far, most of them shot dead.

The opposition has blamed the deaths on Berkut snipers sighted in the area of the protests.