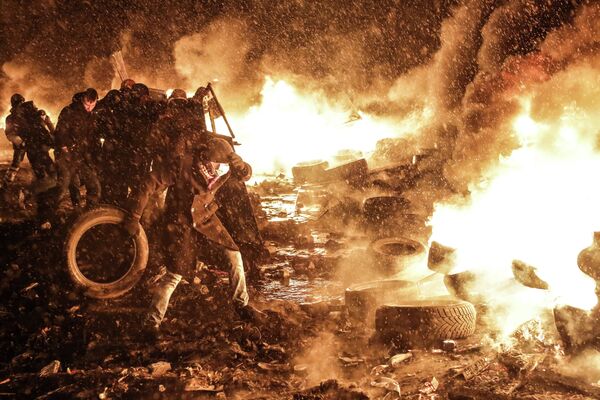 Angry mobs stormed and seized provincial governors’ offices in western Ukraine Friday as unrest spread across the country, prompting calls for a state of emergency to be declared.

MOSCOW, January 24 (RIA Novosti) – Angry mobs stormed and seized provincial governors’ offices in western Ukraine Friday as unrest spread across the country, prompting calls for a state of emergency to be declared.

The regional parliament in the traditionally pro-Russian Crimean Peninsula appealed to President Viktor Yanukovych, the National Security and Defense Council and members of parliament to declare a state of emergency to stop the “anarchy and violence” in Ukraine.

“We propose halting budget payments for regions that have waived the rule of law, until constitutional order is restored there,” the parliament in Crimea said in a statement. “The very basis of a constitutional state and the whole system of state power is under threat."

“The rioters claim they are ‘taking the power in their own hands.’ They obey the decisions of the self-proclaimed ‘People’s Rada’ and have already started forming illegitimate bodies of public authority.”

Anti-government protesters have brought the heart of the capital Kiev to a standstill for almost two months by occupying the central Independence Square in response to a government decision to reject an association agreement with the European Union in favor of enhanced ties with Russia.

While initially a protest against the decision not to forge closer relations with the EU, the discontent in Ukraine has steadily grown increasingly anti-government.

Tensions remain high in the freezing capital after days of clashes between riot police and violent elements within the opposition, which have broken away from a mass protest movement that was holding peaceful anti-government rallies for weeks.

Early on Friday, a crowd of protesters broke into the Agriculture Ministry building in Kiev, meeting no resistance.

A group of protesters tried to break through police cordons surrounding the Cabinet of Ministers and other administrative buildings late on January 19. Protesters threw flares, rocks and Molotov cocktails, while police responded with tear gas and stun grenades.

Dozens of protestors and riot police have been injured in the clashes. Two people have been officially confirmed dead while the opposition claims at least five protesters have been killed.

Protesters continued to erect new lines of barricades in the capital after talks between the government and opposition representatives ended without apparent agreement late Thursday.

Ukraine’s Interior Ministry said in a statement Friday that it was investigating about a thousand people for suspected links to radical groups “whose members are suspected of grave and especially grave crimes, including those committed during the rioting in the capital.”

As the protest movement gains momentum, Ukraine’s Prime Minister Mykola Azarov said the authorities might seek foreign mediation to resolve the crisis. He named the EU and Switzerland as possible mediators.