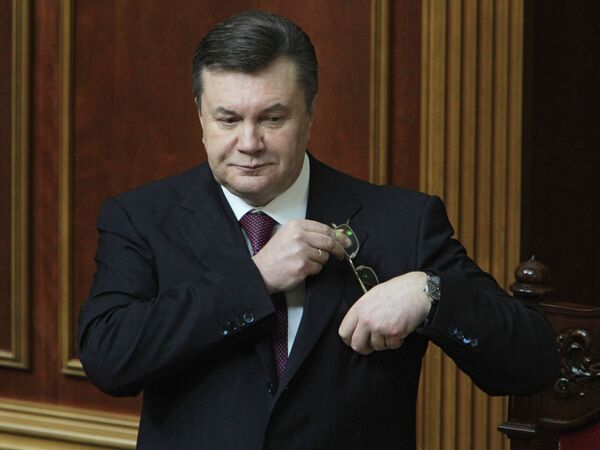 In a bid to ease growing tensions in the country, Ukraine’s president announced on Friday that the country’s parliament would next week consider pardoning detained political activists and reshuffling the government’s top ministers.

KIEV, January 24 (RIA Novsoti) – In a bid to ease growing tensions in the country, Ukraine’s president announced on Friday that the country’s parliament would next week consider pardoning detained political activists and reshuffling the government’s top ministers.

Viktor Yanukovych said at a meeting with public and religious leaders that all detained protesters who are not suspected of grave crimes would be released under amnesty currently being prepared by the Ukrainian parliament.

He said he would also attend an emergency Verkhovna Rada session next week to discuss a reshuffle of his cabinet of ministers.

“Together with lawmakers, we will make a decision about a reshuffle in order to find an option for a more professional government,” he said.

The president also vowed to amend recent anti-protest laws whose adoption triggered violent clashes between protesters and police in the capital Kiev on January 19.

Dozens of protestors and riot police have been injured in the wave of violence. Two protestors have been officially confirmed dead. The opposition claims at least five protesters have been killed.

Yanukovych assured that the authorities are committed to “further talks and a further pursuit of a compromise” with the opposition, but threatened to take “all measures permitted by the law” if tensions continue to escalate.

“The radically minded portion of the protesters will not stop on their own,” he said.

“Not only Ukrainians take part [in violence], they are aided by a number of foreigners from other states who took part in various regional military conflicts and are now wanted internationally,” Yanukovych continued. “All of them are hiding in seized buildings, and we know that weapons are being stored there.”

He said opposition leaders were trying to keep the protest peaceful, but their calls were “simply being ignored.”