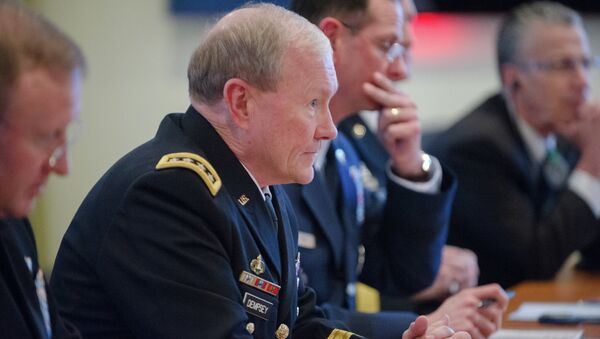 The United States and Russia on Tuesday discussed using US technology to combat terrorism at next month’s Winter Olympics in Sochi amid concerns that extremists could target the games, the Pentagon’s news service reported.

WASHINGTON, January 21 (RIA Novosti) – The United States and Russia on Tuesday discussed using US technology to combat terrorism at next month’s Winter Olympics in Sochi amid concerns that extremists could target the games, the Pentagon’s news service reported.

US Gen. Martin Dempsey, chairman of the Joint Chiefs of Staff, told his Russian counterpart Gen. Valery Gerasimov that the United States is willing to share technical information on countering improvised explosive devices (IEDs) prior to the February 7 start of the Sochi games if the American technology is compatible with Russian systems, the American Forces Press Service (AFPS) reported.

“I reiterated the fact that we would favorably consider requests from them,” the report quoted Dempsey as saying.

Dempsey and Gerasimov met Tuesday in Brussels, where they discussed bilateral military relations and signed a so-called “work plan” spelling out 67 activities in which the two nations’ militaries can cooperate.

Later Tuesday, US President Barack Obama and Russian President Vladimir Putin spoke by telephone and discussed among other issues a “safe and secure Sochi Olympics,” the White House said in a statement.

Washington “has offered its full assistance” with the games, the White House statement noted.

On Monday, the Pentagon offered “air and naval assets,” including two US Navy ships in the Black Sea, to help bolster security for the games.

Russian security services have clamped down on terrorist and militant activities in southern Russia ahead of the Winter Olympics in Sochi, a resort town on the Black Sea.

Twin bombing attacks late last month killed 34 people in the Russian city of Volgograd, which is considered a gateway to Russia’s southern republics of Chechnya and Dagestan, which have been the center of an ongoing Islamic insurgency for the past two decades.

The Pentagon is open to providing US equipment capable of disrupting cellphone or radio signals that militants used to detonate IEDs, The New York Times cited Dempsey as saying Tuesday.

He noted, however, that experts from both countries would need to ensure that the US technology is compatible with systems used by Russian security services, the Times reported.

Dempsey told Gerasimov that US forces have “become extraordinarily familiar with” IEDs in Afghanistan and Iraq, where militant groups have deployed them with deadly results against American personnel during US-led military operations over the past decade, according to the Times.

Dempsey was quoted by AFPS as saying Tuesday that Gerasimov has “a hand-picked, highly trained task force that’s been in place for some time” to help ensure safety at the Sochi Games, which are slated to run through February 23.

“He believes they have in place the intelligence apparatus, as well as the response apparatus, to deal with the threats as they know them this year in Sochi,” Dempsey said of Gerasimov, chief of Russia’s General Staff, according to the report.

In addition to the Sochi Olympics, the two generals discussed US missile defense systems, vehemently opposed by Moscow, and Afghanistan, where Dempsey said the two nations have much in common.

“We agree that a stable Afghanistan and an Afghanistan that is not a sanctuary for terrorism is in our common interests,” AFPS quoted Dempsey as saying.

In welcoming remarks at Russia’s mission to the North Atlantic Treaty Organization (NATO) in Brussels, Gerasimov expressed support for “regular contacts” between the two nations’ militaries as “quite useful,” the Times reported.

Updated with background on phone call between Obama and Putin.