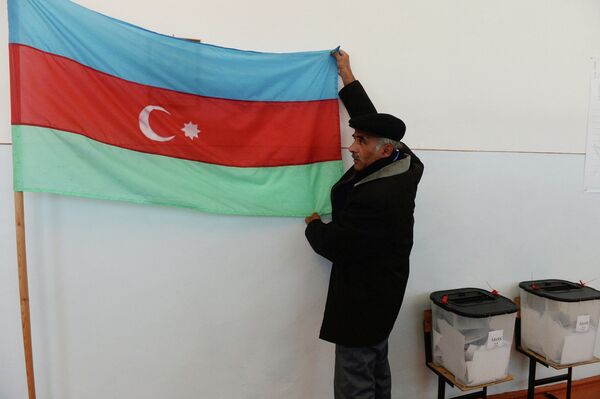 A court in the capital, Baku, on Monday ordered that Election Monitoring and Democracy Studies Center chairman Anar Mammadli be detained for three months as investigations are carried out into claims he was engaged in illegal entrepreneurship.

The center, which has for years faced routine harassment from the authorities, conducted extensive monitoring of widely criticized October elections that secured a third term in power for iron-fisted President Ilham Aliyev.

The US Embassy in Azerbaijan said it was deeply troubled by Mammadli’s arrest and that it was compelled to question whether the “detention is related to his organization's election monitoring and reporting activities.”

The embassy said in a statement that it had raised the issue with senior government officials.

“We urge that Mr. Mammadli be released immediately while the legal process continues,” the statement said.

The Organization for Security and Cooperation in Europe’s rights watchdog said Mammali’s fate posed a risk for democratic processes.

“The reported arrest of Anar Mammadli is disturbing as it endangers citizen election observation, the role of which in ensuring the integrity of electoral processes has been recognized by all OSCE participating states,” said Janez Lenarcic, head of the OSCE Office for Democratic Institutions and Human Rights.

The arrest came just ahead of British Foreign Minister William Hague’s visit to Azerbaijan on Tuesday.

Bloomberg newswire cited Hague as saying the issue of Mammadli had come up during a one-on-one meeting with Aliyev.

Hague was in Azerbaijan to sign off on a deal to build a major gas pipeline from Azerbaijan to Europe, prompting rights activists to accuse Western governments of turning a blind eye to rights violations in the energy-rich nation.

“European delegates visiting Azerbaijan have an obligation to hold a mirror to the wretchedness of Azerbaijan’s worsening human rights record, regardless of the commercial interests that bring them there,” said Denis Krivosheev, Europe and Central Asia Deputy Programme Director at Amnesty International.