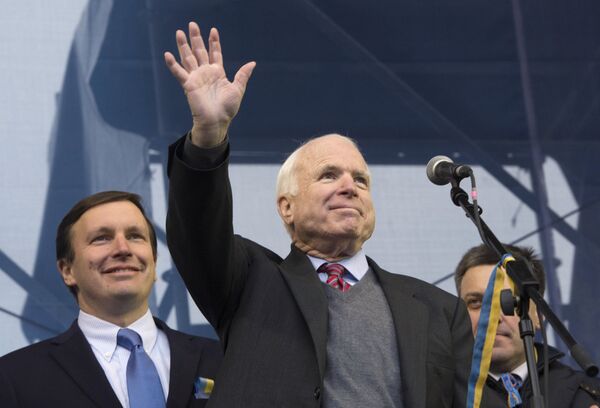 © RIA Novosti . Ilya Pitalev
/
Go to the mediabank
Subscribe
International
India
Africa
Hundreds of thousands emerged onto the streets of Ukraine’s capital Sunday for dueling meetings for and against an embattled government struggling to cope with a political crisis provoked by last month’s decision to back away from greater economic ties with the EU.

KIEV, December 15 (RIA Novosti) – Hundreds of thousands emerged onto the streets of Ukraine’s capital Sunday for dueling meetings for and against an embattled government struggling to cope with a political crisis provoked by last month’s decision to back away from greater economic ties with the EU.

In a show of support for the Ukrainian opposition, US Senator John McCain addressed a crowd of anti-government demonstrators in central Kiev.

"The destiny you seek lies in Europe," McCain said. “The free world is with you, America is with you, and I am with you.”

That remark was greeted with roars of approval and chants of “John McCain, John McCain” and “Thank you, USA.”

Ukrainian protesters have been camped out on Kiev’s Independence Square, where they have erected barricades and tents, for over three weeks.

“It shows that Europe and the United States support democracy,” said Irina Tertitsa, 30, who watched McCain’s speech. “If they were to introduce sanctions as well, that would be super.”

A short distance away, in Marinsky Park, a smaller crowd gathered for a pro-government rally, many of them waving the blue flags of the ruling Party of Regions.

“[The European Union] will turn us into slaves,” said Ivan, a pensioner from Kharkiv, in eastern Ukraine, who refused to give his surname.

Many of the participants at the pro-government rally, who said they supported President Viktor Yanukovych, had arrived in buses from the eastern part of the country, where the leader has his political support base. Some said they had been paid to attend.

Aleksei, 26, who declined to give his surname, said everyone at the rally had been given “a lot” of money. “I came today to see Kiev and earn some money,” he said.

Ukrainian authorities have steadfastly refused opposition demands calls for the Cabinet to be dissolved and the holding of early parliamentary and presidential elections.

But the government has, in an effort to show willingness to compromise, said an agreement association and free trade deals with the EU could be signed in the spring. That likelihood became more remote Sunday, however, with a top official in Brussels lambasting Ukraine over the issue and saying talks on the issue had been put on hold.

Kiev has justified its decision to turn its back on the EU pacts by arguing that it would harm economic relations with Russia. Both the EU and Moscow have accused one another of using strong-arm tactics to secure economic ties with Ukraine.

There has been particular indignation at unconfirmed reports that Yanukovych may seek to lead his country into close cooperation with the Moscow-led Customs Union trade bloc, which currently also comprises Belarus and Kazakhstan.

A resolution adopted at the opposition protest on Independence Square on Sunday said it was inadmissible for Ukraine to enter the bloc.

The resolution also called for the freeing of political prisoners, and referred in particular to former Prime Minister Yulia Tymoshenko, an avowed Yanukovych foe who was jailed for purportedly exceeding her authority in signing a gas deal with Russia in 2009, while head of the government.

Despite concerns ahead of the meetings that troublemakers could provoke unrest, the rallies appeared have passed largely without incident.

Opposition Udar party leader and heavyweight boxer Vitaly Klitschko reacted to apparent commotion on Independence Square during his address by suggesting he would deal with unruly elements himself.

“Let them wait for me. I’ll come over,” Klitschko said, drawing laughter from the crowd.