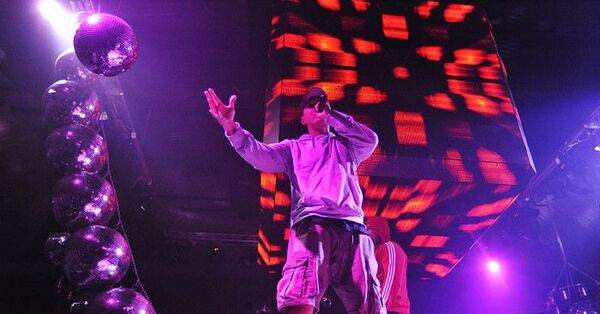 © RIA Novosti . Alexei Naumov
Subscribe
A Russian rapper once honored with an award from President Vladimir Putin has been detained in Moscow on suspicion of assault, city police said Thursday.

MOSCOW, December 12 (RIA Novosti) – A Russian rapper once honored with an award from President Vladimir Putin has been detained in Moscow on suspicion of assault, city police said Thursday.

Police said in a statement that Roman Chumakov – better known by his stage name Roma Zhigan – was being held in custody for a 48-hour period in connection with an attack in northern Moscow in June. An investigation into the incident is ongoing.

The rapper and his four accomplices attacked his business partner in a café, after claiming he had deceived him, a police source said. The attackers said the man had failed to promote Zhigan’s video clips on YouTube and demanded 100,000 rubles ($3,000) in compensation.

The man was forced to withdraw the cash from his credit card in the café and was then asked to pay another 50,000 rubles, the source said. He did not say whether the man paid the second sum to Zhigan.

The 29-year-old singer, who has already served a 3 1/2-year jail term for assault, in 2009 beat out rivals at the "Battle for Respect" face-off, which earned him a prize from Putin, who was Russia’s prime minister at that time.

Russian media reports said Zhigan, who is also believed to be a member of the ruling United Russia party, was picked by Putin as a role model for how a troublemaker and former convict could be redeemed into a successful singer.

The rapper was also involved a July 2010 car rally captured on film and uploaded onto YouTube video in which he and other participants brutally attacked an administrator at a hotel in the southern city of Samara. He and other assailants escaped charges of hooliganism.

Zhigan has recorded songs for three studio albums, which he said were inspired by his jail time. The singer’s latest track, Prosti (Sorry) was released in September.

This is only the latest crime scandal involving a prominent Russian singer. In late October, popular Russian crooner Grigory Lepsveridze – known better by the stage name of Grigory Leps – was blacklisted by the United States for alleged ties to organized crime.