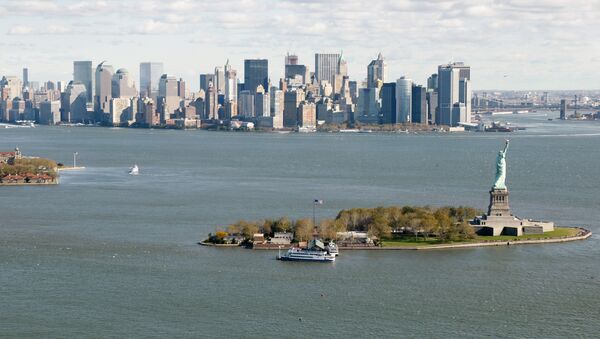 © Sputnik
/
Go to the mediabank
Subscribe
International
India
Africa
Dozens of current or former Russian diplomats and their spouses stationed in New York City have been charged in the alleged defrauding of $1.5 million from a government health care program aimed at helping the poor, US federal prosecutors said.

WASHINGTON, December 5 (RIA Novosti) – Dozens of current or former Russian diplomats and their spouses stationed in New York City have been charged in the alleged defrauding of $1.5 million from a government health care program aimed at helping the poor, US federal prosecutors said Thursday.

The 49 defendants are accused of involvement in the “systematic” fraudulent submission of falsified applications for benefits under the US health care program Medicaid, according to a criminal complaint unsealed Thursday.

During the period of the purported fraud scheme from 2004 to August 2013, the defendants falsely underreported their income or fraudulently claimed that their children were US citizens to obtain Medicaid benefits associated with costs for pregnancy, birth and young children, US prosecutors allege.

During the same period the defendants spent “tens of thousands of dollars” on luxury vacations and expensive watches, clothes, shoes and jewelry at luxury retailers like Swarovski, Prada and Tiffany & Co., the US Attorney’s Office for the Southern District of New York said in a statement.

“Diplomacy should be about extending hands, not picking pockets in the host country,” US Attorney for the Southern District of New York Preet Bharara said in the statement.

Each of the defendants named in the complaint is a current or former diplomat – or the spouse of a diplomat – who allegedly committed the offenses while working in New York City at the Russian Mission to the United Nations, the Russian consulate, or the Russian Trade Representation, according to Bharara’s office.

The Russian Embassy in Washington said Thursday that it doubts the accusations are justified.

“We have been informed about these reports. There are serious doubts that they are well-founded. All these reports need to be examined,” an embassy spokesman said.

The other defendant currently residing in the United States is employed at the Russian Embassy in Washington but was working for the Russian Consulate in New York at the time of the alleged offenses, according to the statement.

The remaining 38 defendants are no longer residing in the United States, prosecutors said Thursday.

All of the defendants named in the unsealed complaint have diplomatic immunity, and none have been arrested, Bharara’s office told RIA Novosti on Thursday.

Bharara has run afoul of the Russian government in recent years in connection with his role in overseeing the extradition and trials of Konstantin Yaroshenko and Viktor Bout, Russian nationals who committed no crimes on US territory but were arrested in third countries and subsequently transferred into US custody.

In April, Bharara was one of 18 US citizens that Moscow barred from entering Russia in response to a US blacklist of the same number of Russian citizens targeted under the Magnitsky Act sanctions enacted by Washington to punish alleged Russian rights abusers.

Updated with comments from Bharara and background throughout