Ukraine Protesters Dig In Amid Calls for Early Elections 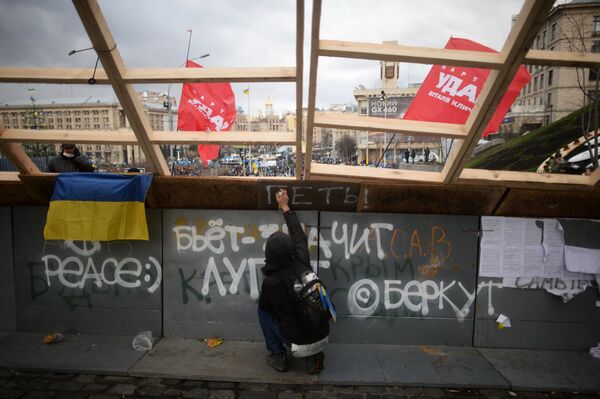 © RIA Novosti . Ilya Pitalev
/
Go to the photo bank
Subscribe
Protesters in the Ukrainian capital erected barricades early Monday morning after a weekend of violent clashes between police and demonstrators.

KIEV, December 2 (RIA Novosti) – Protesters in the capital of Ukraine dug in for an extended occupation of the center of the city Monday evening as the opposition called for early elections to end political tensions in the former Soviet nation.

As increasing evidence emerges of the brutal police reaction to demonstrators over the weekend, authorities announced they are beefing up the security presence in Kiev.

The latest wave of unrest and increasingly vocal calls for the ouster of President Viktor Yanukovych began on November 21 after the government’s surprise decision to back away from closer integration with Europe.

The government explained its about-face on EU trade pacts that had been due for signing last week by saying the country's economy would suffer. It pledged instead to focus on strengthening ties with Russia.

On Monday evening, crowds at the central Independence Square continued to swell as demonstrators reinforced barricades around the space that served as the focal point of the Orange Revolution of 2004-2005. According to reports from the scene earlier in the day, improvised barriers were being fashioned from Christmas trees, city benches, parts of metal fences and traffic barriers.

Numerous tents equipped with heating stoves have been erected in the square, where temperatures are hovering around freezing.

Yatsenyuk, who leads the Batkivshchyna (Fatherland) party faction in parliament, said at a press conference Monday that a new government should be formed as soon as early elections have taken place.

Opposition parties have put forward a motion in parliament on dissolving the Cabinet.

Oleksandr Yefremov, who leads Yanukovych’s Party of Regions faction in parliament, said his party saw no grounds for such a vote, however, suggesting that the authorities may seek to hold firm.

Hundreds of thousands of people marched through downtown Kiev on Sunday in the largest show of discontent since Yanukovych's refusal to sign a much-anticipated series of trade deals with the EU last month sparked a wave of largely peaceful rallies.

The Interior Ministry said Monday that additional police forces would be deployed in Kiev to ensure public order due to mass protests. About 1,000 police officers are currently deployed there.

Demonstrations, which had until this weekend been largely peaceful, took a sour turn Saturday morning, when police violently cleared Independence Square.

Kiev city administration officials said Monday that at least 190 protesters and 140 police officers were injured in the unrest across Kiev.

In a telephone conversation Monday, EU Commission President Jose Manuel Barroso urged Yanukovych to investigative use of force by police.

The EU statement said Yanukovych agreed with the need to settle tensions peacefully and said claims of police abuse would be investigated.

NATO Secretary General Anders Fogh Rasmussen called on Sunday for both sides to avoid violence, and urged Ukraine to "fully abide by its international commitments to respect the freedom of expression and assembly."