Mine Opponents Held for Alleged Bribery as Activists Cry Foul 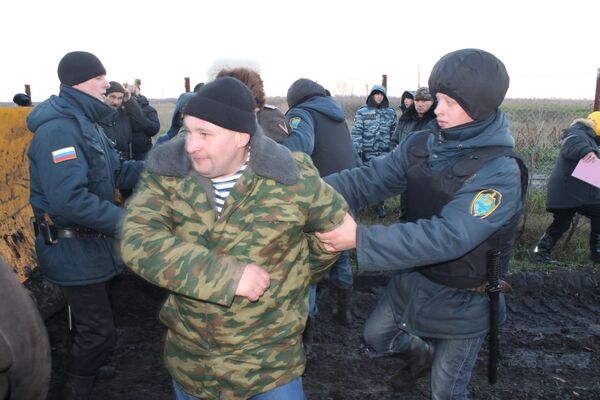 Police in Russia have detained two people formerly linked to an environmental protest movement for alleged extortion in a case activists say is a crude attempt to discredit their campaign.

MOSCOW, November 29 (Alexey Eremenko, RIA Novosti) – Police in Russia have detained two people formerly linked to an environmental protest movement for alleged extortion in a case activists say is a crude attempt to discredit their campaign.

Plans by UMMC to explore nickel and copper deposits by the Khoper River in the agricultural-intensive Voronezh Region in southern Russia has been greeted by vocal resistance from local residents and Cossack groups.

The standoff has been ongoing since mid-2012 and has resulted in violent clashes between protesters and company guards. UMMC estimates that 60 million rubles ($1.8 million) worth of equipment was destroyed in attack by project opponents.

The Interior Ministry said in a statement Bezmensky and Zhitenyov approached the company with a promise to end the protest movement in exchange for a cash payment.

In police footage of the arrests, the suspects are seen being asked to open the trunk of their cars to reveal bags containing cash and branded with the UMMC logo. Police say the money was the payment for ending the nickel mine dispute.

In the footage, neither man is shown commenting on whether they had approached UMMC.

Tatyana Kargina, a spokeswoman for the Save Khoper movement, told RIA Novosti on Friday that Bezmensky and Zhitenyov had not been active in the anti-mining movement for some time.

Bezmensky was expelled from the movement in July, while Zhitenyov retired from active campaigning after being beaten up in May by private guards at the nickel exploration site, Kargina said.

“Activists on the ground have the feeling it could be a setup,” Kargina said.

Fellow Save Khoper activist Konstantin Rubakhin said that UMMC would in any case have no chance of using its considerable financial means to halt resistance to their project.

“Giving money to stop the protest is like paying to stop the winter,” Rubakhin told RIA Novosti.

Police say the two suspects have been arrested and taken to Moscow. If charged and convicted of extortion, they face up to 15 years in jail.

The Voronezh Region is part of an area historically occupied by the Cossacks, a conservative-minded socio-ethnic group undergoing a revival after decades of repression under the Soviet Union.

Opponents of the nickel exploration project say it poses a danger to the environment, including to the nearby Khoper Natural Reserve.

Eighty-nine percent of the local population oppose nickel exploration plans, according to a poll conducted last fall by the Sociology Institute at the Russian Academy of Sciences.

UMMC insists nickel mining poses no threat to the environment and would create thousands of jobs in the region.

The miner, controlled by Uzbek-born businessman Iskander Makhmudov, whose wealth was this year valued at $8.7 billion by Forbes, plans to begin producing nickel in the region by 2020.