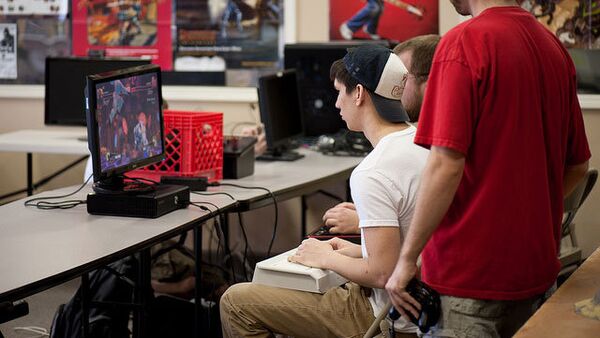 Ukrainian programmers have got in touch with their inner radical, releasing an online “nationalist simulation” game where the player shoots “enemies of Ukraine,” including gays, Jews and Russians.

MOSCOW, November 22 (RIA Novosti) – Ukrainian programmers have got in touch with their inner radical, releasing an online “nationalist simulation” game where the player shoots “enemies of Ukraine,” including gays, Jews and Russians.

The brutally primitive gameplay sees a spherical protagonist wield an automatic rifle to demolish oncoming hordes of similarly round enemies.

The protagonist is painted in the blue and yellow of the Ukrainian flag, while the enemies come in a variety of colors, including those of the Russian and American flags and the rainbow flag used to symbolize the LGBT community. The Russian attack comes against the background of Russian President Vladimir Putin riding a bear.

The game, available free of charge at Five.od.ua, concludes with a never-ending horde of incoming spheres sporting Jewish sidelocks.

The fight is accompanied by nationalist shouts in Ukrainian and ends with a headcount of “enemies of Ukraine destroyed.”
The developers said the politically incorrect game is meant as a satire of radical patriots.

“The game is a mockery of nationalism and hatred,” journalist Alexei Ishchenko, who co-created the game, told Tjournal.ru news website Thursday.

Ukraine only gained independence with the demise of the Soviet Union in 1991. The country, which has a centuries-old track record of anti-Semitism, is split into the pro-Russian east and the Europe-leaning west that sport a fair amount of, respectively, Soviet patriots and Ukrainian ultranationalists.