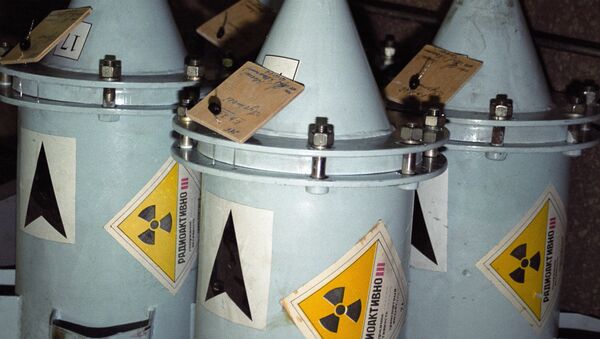 ST.PETERSBURG, November 14 (RIA Novosti) - Russia started delivery Thursday of the last batch of low-enriched uranium to the United States under a long-standing program to convert Soviet-made nuclear weapons into fuel.

A state nuclear corporation Rosatom official told RIA Novosti that 160 metric tons of low-enriched uranium are being loaded in 10 containers onto a ship that will deliver the cargo to the US port of Baltimore.

The program, which is known as the Megatons-to-Megawatts agreement, was signed in February 1993 and expires this year.

Russia has earned $17 billion in revenue converted 500 metric tons of high-enriched uranium -- equivalent to 20,000 nuclear warheads -- from dismantled nuclear weapons into low-enriched uranium to be used for fuel in US commercial reactors.

Fuel derived from Russian nuclear weapons provided nearly half of the United States’ commercial nuclear energy, accounting for about 10 percent of all power produced in the United States each year for the past two decades, the US National Nuclear Security Administration said in June.

In March 2011, Russian state-owned uranium producer and trader Techsnabexport signed a $2.8 billion deal with the US Enrichment Corporation to supply it with low-enriched uranium for ten years starting in 2013.