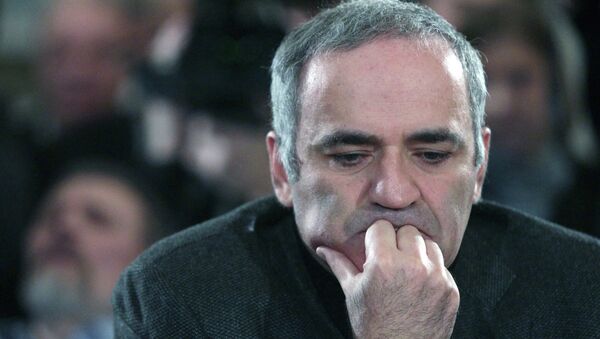 Kasparov, 50, had sent a Latvian-language letter to most of the political factions in the Baltic state’s parliament, the Saeima, asking Latvian politicians to grant him citizenship to help him pursue his political activities “in Russia and in other countries across the world where civil rights are denied and democratic norms are trampled on.”

“We have not found any grounds so far to consider the issue of granting [Kasparov] citizenship,” said Ilmars Latkovskis, chairman of the Saeima's Social Cohesion Committee.

“It is the first such case in a long time, and it cannot be decided today – it’s a lengthy procedure that will take a long time, although the issue has prompted heated debates, and we would like to provide some answers, but frankly – there is not much to say,” Latkovskis told reporters after an hour-long discussion of Kasparov’s request by the committee.

“It is important to agree on procedural issues first,” the lawmaker said.

Andrei Yudin, a lawmaker from the liberal-conservative Unity party, said he did not see any special merits that could facilitate granting Latvian citizenship to Kasparov.

The Latvian parliament can grant citizenship to foreigners of “special merit” or to those who have been of service to Latvia.

The issue has been further complicated by Kasparov’s desire to keep his Russian citizenship.

A new law on citizenship signed by the Latvian president in early June allows Latvian nationals to hold passports of other states. Russia and other non-EU former Soviet states, however, are not on the list of permitted countries.

Since retiring from professional chess in 2005, Kasparov has become active in Russian politics as a fierce critic of Russian President Vladimir Putin. This summer, he told reporters in Geneva that he was currently refraining from returning to Russia over fears of persecution for his political activities.

In early October, Kasparov, who was ranked chess’s world no. 1 for nearly two decades, announced he would run for president of the World Chess Federation, known by its French acronym FIDE, in elections next year.