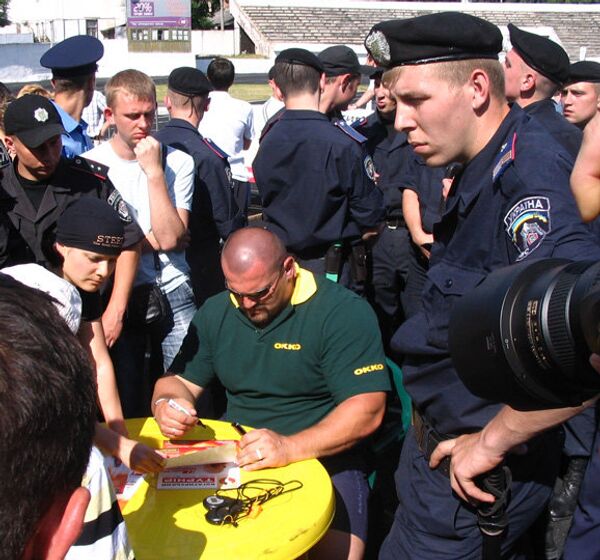 © Photo : wikipedia.org / Texnik
Subscribe
A World’s Strongest Man title winner appears to have inadvertently broken up a gay rights rally in Ukraine after participants assumed he had been sent by the police, an online news portal has reported.

Editor’s notice: Dear readers, the following story is false as it was based on an unchecked report by a Ukrainian website. Please disregard.

MOSCOW, November 11 (RIA Novosti) – A World’s Strongest Man title winner appears to have inadvertently broken up a gay rights rally in Ukraine after participants assumed he had been sent by the police, an online news portal has reported.

Ridus.ru reported that a group of people taking part in the rally in the city of Lviv quickly dispersed as they saw Vasyl Viryastuk walking down the street on his way to the dentist.

“Although our action was peaceful, we were ready for police, as always, to disperse us,” Vladislav Mily, a member of the Gay Partisans advocacy group, told Ridus.ru.

“But for the strongest man on the planet to chase down gays? We didn’t expect such a move from the authorities,” Mily was quoted as saying.

Viryastuk, a 39-year-old champion bodybuilder who won the World’s Strongest Man title in 2004, denies that he was even aware why the Nov. 9 rally was taking place.

Ridus.ru quoted Viryastuk as saying he was in a foul mood because of a severe toothache and that he was headed to the dentist when he came across the gathering.

“Gays? What gays?” Ridus.ru cited him as saying. “I was in a big hurry and only managed to see some kind of cluster of people really quickly and loudly scattering in different directions. I thought it was kids playing.”

Discrimination against sexual minorities is widespread in the former Soviet nation and activists have complained that authorities have done little to protect gay people from intimidation.

Amnesty International earlier this year called on Ukraine to live up to commitments on passing a law outlawing discrimination on the basis of sexual orientation.