Tajikistan Leader Set to Coast to Win in Uncompetitive Vote 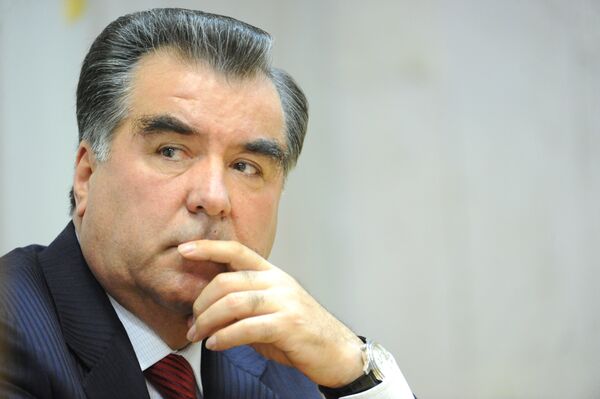 Voters in the Central Asian nation of Tajikistan head to the polls Wednesday for an election that will almost certainly confirm incumbent President Emomali Rakhmon’s firm grip on power amid a frenzy of state-choreographed adulation.

DUSHANBE, November 5 (RIA Novosti) – Voters in the Central Asian nation of Tajikistan head to the polls Wednesday for an election that will almost certainly confirm incumbent President Emomali Rakhmon’s firm grip on power amid a frenzy of state-choreographed adulation.

With the exclusion from the race of the only genuinely opposition figure, the election is expected to hold few surprises.

Rakhmon, a 61-year-old former collective farm director who has been at the helm of the struggling former Soviet nation for more than two decades, is guaranteed to brush aside nominal rivals to secure his fourth term in power.

Current rules stipulate that the upcoming seven-year term should be his last.

In the previous presidential election, in 2006, Rakhmon won the first round of voting with 79.3 percent of the vote.

This prompted the Social Democratic Party to describe the elections as “fictitious” and to say it would boycott the vote. The Islamic Revival Party has likewise declined to take part in the election.

Bobonazarova’s failed candidature has failed to rouse any visible public discontent, however, and the likelihood of any protests after the election appears slim.

The election monitoring body of the Organization for Security and Cooperation in Europe has noted in an interim report on the upcoming election that recommendations for improvements on previous flawed votes have gone unheeded.

"This election will be conducted according to essentially the same legal framework as for the 2006 presidential election," the report said.

Other than Rakhmon, who is the candidate for the ruling Popular Democratic Party, the other nominal contenders are Tolib Bukhoriyev of the Agrarian Party, former Transportation Minister Olimdzhon Boboyev of the Economic Reform Party, Saidjaffar Ismonov of the Democratic Party, Ismoil Talbakov of the Communist Party and Abdukhalim Gaffarov of the Socialist Party. All registered candidates have demurred from sharply criticizing the president.

The OSCE's Office for Democratic Institutions and Human Rights said there has been no visible campaign by Rakhmon's rival candidates.

Rakhmon has in effect not run an election campaign and has refrained from urging Tajik citizens to vote for him. But he has over the last two months toured many parts of the country on working visits, during which he has opened new schools and hospitals.

Typically, during these visits, Rakhmon’s path is lined by hundreds of schoolchildren and university students singing songs and reading poems in which he is frequently described as the “just Shah” and “king of kings.”

Rakhmon has promised that if he wins, he will reduce the proportion of poor people in Tajikistan by 2015 to 30 percent, from the current 47 percent. By the end of his seven-year term, he says he will bring that figure down further to 20 percent and increase real incomes fourfold.

His electoral program also promises major investments in agriculture, the support of small and medium businesses, improvements to the investment climate and the creation of a modern, democratic and secular government.

But government critics maintain that any real improvements have been rendered virtually impossible by rampant corruption, leaving the country heavily dependent on the remittances of migrant laborers, most of whom live in Russia.

Rakhmon was first elected as president in 1994, after serving as head of state in acting capacity while a civil war was still raging in the mainly Muslim ex-Soviet nation. He has been re-elected twice: in 1999 and in 2006.

The five-year presidential term was extended by two years in a 1999 referendum. In 2003, a constitutional referendum amended the rule on term limitations to ensure that Rakhmon could serve for another two terms.

If Rakhmon is elected on November 6 to his fourth term in power, he will under current law be barred from running for election until after 2020.

Voting will start at 6 a.m. local time (0100 GMT) and continue over a span of 14 hours. Preliminary results are expected Thursday.

Around four million voters are registered in Tajikistan, although it is far from clear exactly how many Tajiks currently based abroad for work will have access to ballot boxes.

Sixty-one election precincts have been set up outside the country, including 24 in Russia.