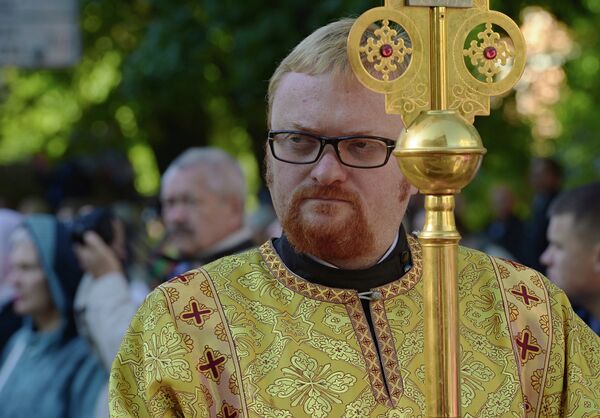 © RIA Novosti . Alexei Danichev
/
Go to the photo bank
Subscribe
Outspoken religious Russian lawmaker Vitaly Milonov cast a shadow on a Halloween celebration in St. Petersburg on Thursday night when he turned up to denounce the “Satanic” get-together as a slap in the face of the Russian people.

MOSCOW, November 1 (RIA Novosti) – Outspoken religious Russian lawmaker Vitaly Milonov cast a shadow on a Halloween celebration in St. Petersburg on Thursday night when he turned up to denounce the “Satanic” get-together as a slap in the face of the Russian people.

Milonov showed up at the gathering in St. Petersburg’s Park of Internationalists where about a thousand people - according to estimates by local news website Fontanka.ru - had gathered, some in costumes and with children, to light paper lanterns and take part in a competition for the best pumpkin jack-o’-lantern.

“Satanist freaks have organized a witches’ sabbath near an Orthodox cross and a monument to fallen soldiers,” the lawmaker tweeted.

A small Orthodox cross dedicated to soldiers who died in the Soviet war with Afghanistan stands outside a church near where the Halloween festivities were taking place inside the park.

In a video of the event posted online by Fontanka.ru, Milonov told revelers that the police were on their way and that they could “take [their] horns with them” to the police station. His speech on the offensiveness of the celebration was cut off by a group of exuberant young people chanting “Halloween.”

Shortly afterwards, the organizers called an end to the event “for technical reasons,” Fontanka.ru reported.

Milonov, a deeply conservative member of Russia’s ruling United Russia party, is well-known for his aggressively religious views. He authored the city’s so-called gay propaganda law, which took effect earlier this year, and has engaged in a series of public rants decrying the evils of Lady Gaga, Madonna and the tongue-in-cheek “religion” of the Flying Spaghetti Monster.

Halloween is annually targeted by religious conservatives in Russia who claim the holiday damages the spiritual health of children and propagandizes death and the occult. Schools in Russia’s Siberian city Omsk were banned by the local education ministry from celebrating Halloween this year.