No Russian Ban on Ukrainian Imports After EU Deal – Minister 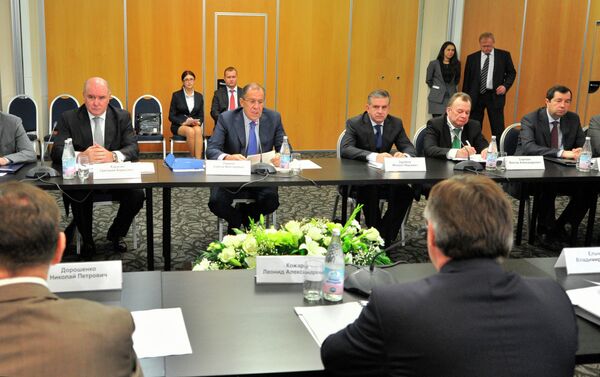 © RIA Novosti . Sergei Pivovarov
/
Go to the mediabank
Subscribe
International
India
Africa
The lucrative Russian market will not be closed to Ukraine after it signs a free trade agreement with the EU, but Kiev will lose trade preferences, Russia’s foreign minister said Monday.

ROSTOV-ON-DON, October 28 (RIA Novosti) – The lucrative Russian market will not be closed to Ukraine after it signs a free trade agreement with the EU, but Kiev will lose trade preferences, Russia’s foreign minister said Monday.

“We’re not talking about a ban on imports from Ukraine,” Sergei Lavrov said at a press conference after a meeting with his Ukrainian counterpart Leonid Kozhara.

“But preferences… that follow from an agreement about a free trade zone in the Commonwealth of Independent States, these preferences will of course be void,” Lavrov said in Rostov-on-Don.

The EU deal will require Russia and Ukraine to look for a new “optimal model of bilateral cooperation,” Kozhara said at the same press conference, but did not give details.

Ukraine is expected to sign free trade and association agreements with the European Union on November 28-29.

Moscow has unsuccessfully tried to have Kiev join instead the Customs Union of Russia, Belarus and Kazakhstan, hinting at economic sanctions and even cancelation of a visa-free regime with Ukraine in case of a EU deal.

Lavrov denied Monday that Russia would cancel visa-free travel with Ukraine, but said travel will not be permitted anymore on internal passports.

Both countries issue separate international passports for foreign travel, but thousands still cross the Ukrainian-Russian border on an internal passport.

Russian-Ukrainian bilateral trade turnover stood at $24.6 billion, or 4.5 percent of Russia’s total foreign trade in the first eight months of 2013, according to Russia’s Federal Customs Service.

Ukraine’s trade with the EU and other European countries stood at $29 billion over the same period, according to official Ukrainian data.

Russia and Ukraine will also step up work to delineate their sea borders and continue cooperation on restarting production of An-124 heavy-lift cargo planes, the ministers said.

The two nations will also step up cooperation in the space industry and production of nuclear fuel, Lavrov said in a separate speech Monday.