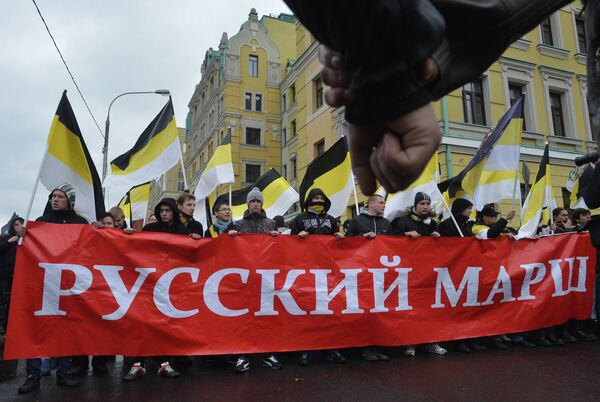 A march of up to 30,000 activists has been authorized for the Lyublino district in southeast Moscow next Monday, organizer Dmitry Dyomushkin wrote on his page on the Vkontakte social network.

The rally will wrap up with a show by skinhead oi punk band Kolovrat, some of whose songs are on the federal blacklist of extremist materials in Russia, Dyomushkin said earlier.

This year’s march comes less than a month after anti-migrant riots rocked another Moscow suburb, the southern district of Biryulyovo.

Those clashes were partially blamed on nationalists, which had prompted speculation that City Hall might ban the upcoming rally.

The city’s migrant organizations said earlier they were considering their own rally to counter the nationalists, but recently backtracked.

Eighty cities across Russia and other countries, including Kiev and Brussels, will host their own Russian Marches on Monday, according to the event’s website.

Russian Marches have been held since 2005. Last year, about 6,000 attended the Moscow rally, according to police estimates, while organizers put the figure at about 10,000.

The event attracts a diverse crowd, mostly comprising radicals, from neo-Nazis to ultraconservative Christians. Fascist salutes and quirky costumes – including bearskins – are a common sight at the marches.