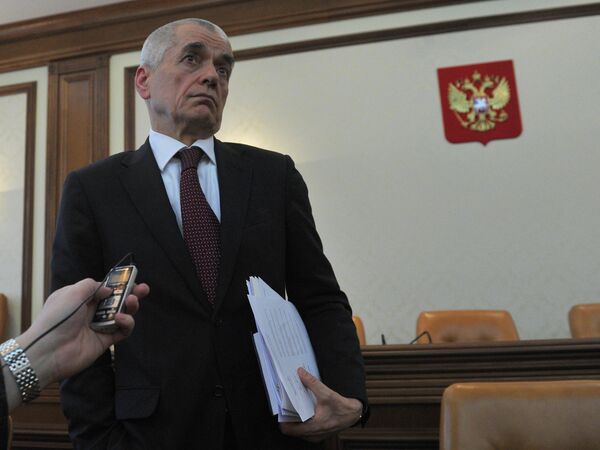 © RIA Novosti . Alexey Kudenko
/
Go to the photo bank
Subscribe
Russia’s long-time top health official, known for his controversial import bans and colorful medical advice, has been relieved of his duties as head of the country’s consumer rights watchdog and appointed as an aide to Prime Minister Dmitry Medvedev, Medvedev’s spokeswoman said Wednesday.

Gennady Onishchenko was relieved as head of the Rospotrebnadzor watchdog due to his contract expiring, spokeswoman Natalya Timakova said.

She added that a former deputy to Onishchenko, Anna Popova, had been appointed acting head of the watchdog and that a final decision on who would head the agency would be made later on.

Timakova said that a year ago Medvedev proposed that Onishchenko become an aide to the prime minister once his Rospotrebnadzor contract was over, the Kommersant newspaper reported.

Russian President Vladimir Putin's spokesman Dmitry Peskov said the Kremlin hopes the new head of Rospotrebnadzor will be at least as "effective" as Onishchenko.

Onishchenko, who celebrated his 63rd birthday on Monday, is notorious for imposing selective food import bans that have serious consequences for the economies of Russia’s ex-Soviet neighbors that they usually target.

These bans usually occur against the background of political tension between Russia and the affected country, and are routinely condemned as a Kremlin bullying tactic.

Since being appointed head of Russia’s federal health inspection agency when it was founded in 2004, Onishchenko has initiated bans on Georgian wine, Belarusian and Lithuanian dairy products, Ukrainian chocolate, Tajik dried fruit and nuts (he later called for a temporary ban on Tajik migrants themselves) and European vegetables.