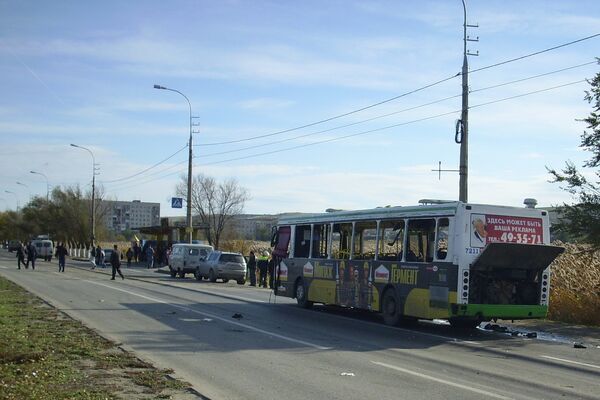 Investigators in Russia said at least six people were killed Monday after a suspected female suicide bomber detonated an explosive device on a bus in the southern city of Volgograd.

MOSCOW, October 21 (RIA Novosti) – Investigators in Russia said at least six people were killed Monday after a suspected female suicide bomber detonated an explosive device on a bus in the southern city of Volgograd.

Investigators said preliminary information indicated the attack had been carried out by Naida Asiyalova, a 30-year old woman from Russia’s republic of Dagestan, in the North Caucasus, which has been riven by unrest since the mid-1990s.

The government has implemented a wide range of measures to eliminate terrorist threats in Russia’s restive south as the country prepares to host the Winter Olympics early next year in the city of Sochi.

But this attack, if proved to have been carried out by a female suicide bomber, will serve as a stark reminder of the persisting dangers stemming from a decades-long insurgency in the North Caucasus.

Investigative Committee spokesman Vladimir Markin said that, according to eyewitnesses, the explosion took place “almost immediately after” the woman got on the bus.

“As of now, six dead people have been found, as well as the body of the suicide bomber” Markin said.

By evening, 28 people had been taken to hospital, including eight in serious condition, a city public health official told RIA Novosti. Around 50 people were believed to be riding the bus at the time of the blast.

The explosion took place at about 2 p.m. local time (10:00 GMT) in the Kransoarmeisk district in Volgograd, a city formerly known as Stalingrad.

State-run English language news channel RT quoted a local resident, identified only as Ilya, as saying the road at the scene of the blast was strewn with broken glass.

“I saw a woman sitting inside the bus. She was covered with blood and I couldn’t make out whether she was alive or not. She was just sitting there,” Ilya told RT.

The Investigative Committee said it has opened a case on multiple murder, terrorism-related and arms trafficking charges.

The local branch of the National Antiterrorism Committee said Monday evening that it was introducing a state of heightened alert for a 15-day period in the Volgograd province in response to the blast.

Attacks on security forces, police and civilians generated by ethnic, religious and political rivalries, as well as poverty and corruption, occur regularly in the North Caucasus.

The violence is also fed by an Islamist insurgency, which has been especially resilient in Dagestan and has fueled a series of separatist wars in the neighboring republic of Chechnya.

Suicide attacks by women in the early 2000s became a trademark tactic used by Islamist rebels against civilian targets.

Transportation has frequently constituted a soft target for attacks.

Suicide attacks carried out by two women from Dagestan on Moscow metro stations in 2010 left 39 dead and 128 injured.

In November 2008, a female suicide bomber attack on a bus station near a market in the southern city of Vladikavkaz, in North Ossetia, claimed 12 lives and injured 40.