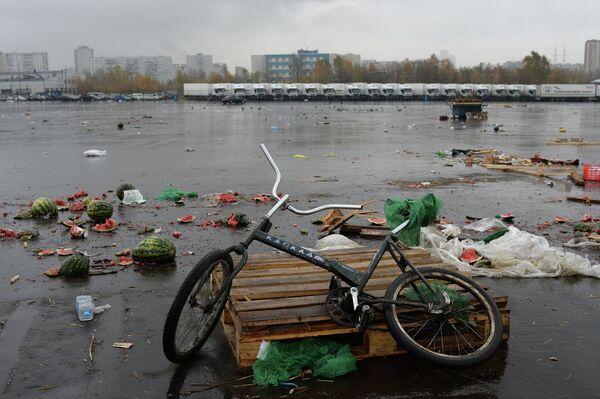 Russia’s Investigative Committee said it had opened a criminal case into enabling illegal migration against Aliaskhab Gadzhiyev, the general director of Novye Cheremushki – a produce company operating the market – and Magomed Churilov, the company’s board chairman.

Churilov has already been detained, the committee said, while Gadzhiyev is still at large and on the federal wanted list.

The two men worked with unnamed accomplices to provide work, a salary and accommodation to two Uzbeks and one Moldovan who were living in Russia illegally, investigators said in a statement posted on the committee’s website.

The director of the vegetable market’s security company has also been detained, investigators added, without specifying what he is suspected of.

Earlier on Wednesday, however, Moscow Mayor Sergei Sobyanin cast doubt on the identities of those running the vegetable market, which was raided by police Monday in a roundup of illegal workers, a day after an angry mob of nationalists stormed the market.

Sobyanin refused to identify the Novye Cheremushki representatives wanted by police at a press conference, saying, “we can only assume [the names], because officially, other people are listed as the owners [of the company].”

Churilov and Gadzhiyev are listed under their respective job titles on Novye Cheremushki’s website.

The consumer watchdog carried out a spot check Monday at the market and ordered it to close for five days, and requested a court to freeze the operations of Novye Cheremushki for 90 days.

The market, located in Moscow’s southern Biryulyovo neighborhood, was the scene of violent riots Sunday as nationalists clashed with police in a fit of xenophobic unrest. A mob of people broke into the market, which allegedly employed many migrant workers, searching for and attacking migrants, shouting nationalist slogans and smashing windows.

The violence was sparked by the fatal stabbing in Biryulyovo last week of 25-year-old local man Yegor Shcherbakov. The suspected killer was identified as an Azeri national, who was arrested Tuesday.