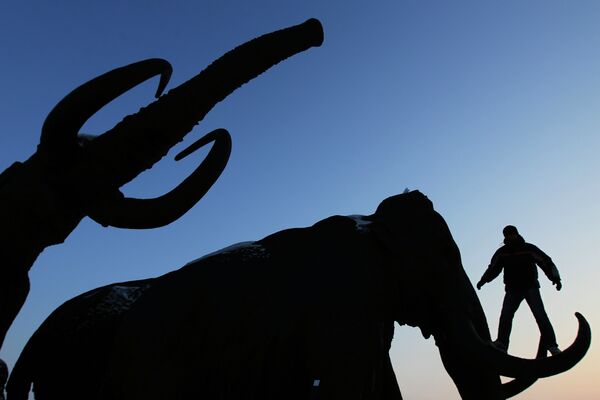 The rare remains of an unusually large southern mammoth have been discovered in eastern Uzbekistan, media in the Central Asian nation reported Monday.

It is the first time such a find has been made in Uzbekistan, said Farida Ametova, a member of the archeological team, according to reports.

The mammoth’s 4-meter (13 feet) tusks and teeth had been buried near a riverbed, but were partly exposed during a spring mudslide near the city of Akhangaran the Tashkent region, reports said.

Paleontologists estimate the beast was 5.5 meters (18 feet) tall and say the remains were between 1.2 million and 1.8 million years old, according to local media.

She added that scientists are working to restore the tusks and teeth before they start to excavate the rest of the skeleton.

“We are quite lucky to have such a unique find,” Ametova said, local media reported.

Paleontologists believe the area where the beast was found to be a veritable graveyard of prehistoric animals, especially mammoths, as it was previously the site of a large river abundant in flora and fauna.

The southern mammoth, a vegetarian native to Europe and Central Asia, is believed to have lived between 2.6 million and 0.7 million years ago, during the Pleistocene period.

Including the Uzbekistan find, nine relatively complete southern mammoth skeletons have been discovered to date. One of those was unearthed in Russia’s North Caucasus in February.

Four of the prehistoric beasts’ bodies are kept in Russia, two are in Italy, and another two are located in France and Serbia.