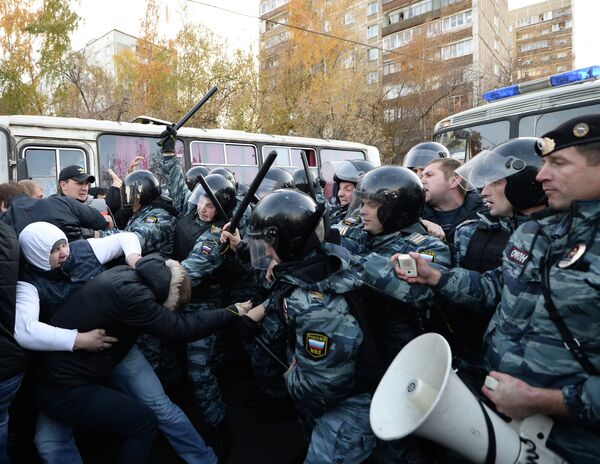 Police in the Russian capital say they have detained over 300 people on disorder offenses, after protests over a recent murder in southern Moscow turned violent.

MOSCOW, October 13 (RIA Novosti) – Police in the Russian capital say they have detained over 300 people on disorder offenses, after protests over a recent murder in southern Moscow turned violent.

A police spokesperson said that, as of 22:00 Moscow time, "another 100 people" had been detained in the capital's Southern district.

Earlier Sunday evening, police said that “about 200 people” had been detained on public disorder offenses in an operation that was still underway, bringing the total number detained to about 300, local media report.

The protest in southern Moscow on Sunday afternoon drew up to 1,000 people, by some estimates, including residents, lawmakers, football fans and nationalist activists, local media reported.

Like an earlier protest Saturday, Sunday's discontent focused on local police headquarters, but turned violent when a nearby shop and vegetable market were targeted – reportedly over the high numbers of migrant workers employed there. Groups of protesters forced their way into the shop, breaking glass and setting off smoke bombs.

Russian Interior Minister Vladimir Kolokoltsev has called a snap meeting over the violence in southern Moscow, which was sparked by a fatal attack on a 25-year-old man in the region.

Local law enforcement agencies have circulated CCTV footage of a man they believe to be a suspect. Russian media have identified the alleged attacker as a migrant.

In recent years, Russia has seen a series of high-profile crimes with a racial or ethnic component over which locals come together to express their outrage in unsanctioned protests.

These are often directed both at what they perceive as the authorities’ inability or unwillingness to hold the perpetrators to account, and at the target ethnic community.

Late on Sunday, Moscow police stressed that an incident in the capital’s north, in which about 60 people had been detained, was a local dispute over a debt, and was unrelated to events in southern Moscow.