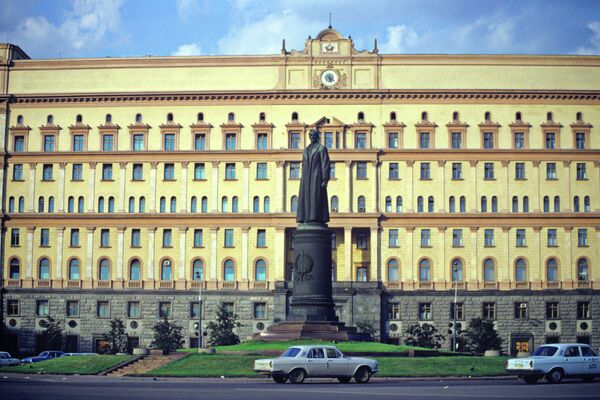 © RIA Novosti . Vladimir Fedorenko
/
Go to the mediabank
Subscribe
International
India
Africa
The statue of Felix Dzerzhinsky, the founder of the Bolshevik secret police, may be restored to its "rightful" place in Lubyanskaya Square in downtown Moscow, a senior Moscow lawmaker said.

MOSCOW, October 12 (RIA Novosti) - The statue of Felix Dzerzhinsky, the founder of the Bolshevik secret police, may be restored to its "rightful" place in Lubyanskaya Square in downtown Moscow, a senior Moscow lawmaker said.

The Moscow government has announced plans to restore seven famous monuments, including the statue of Dzerzhinsky, better known under his nickname as the Iron Felix. The restoration cost is estimated at over 50 million rubles (some $1.6 mln).

“I think it could be restored and returned to its place,” deputy speaker of the Moscow City Duma, Andrei Metelsky, said in an interview with the Russian News Service radio on Friday.

“If they say they are ready to allocate the money, then the process must be completed,” Metelsky said.

In 1958, a bronze statue of Dzerzhinsky by Soviet sculptor Yevgeny Vuchetich was erected in Moscow's Lubyanskaya Square (renamed in his honor into Dzerzhinsky Square) directly in front of the KGB headquarters.

The statue eventually acquired the nickname 'Iron Felix' among Muscovites. In August 1991, after the failed coup by Politburo hardliners against the then Soviet president Mikhail Gorbachev, the monument was toppled by a crowd of protesters, who used a crane to dismantle the 15-ton statue.

The Iron Felix has been kept at the so-called "graveyard of memorials" near Moscow's Central House of Artists, side by side with other disgraced Soviet monuments, for more than two decades.

There have been numerous calls to return the monument to its original spot, but they have always been rejected by Moscow lawmakers.

Dzerzhinsky is best known for establishing and developing the Soviet State Security forces under their original name Cheka (1917–26). The Cheka was notorious for torture and mass summary executions, performed especially during the Red Terror and the Russian Civil War.