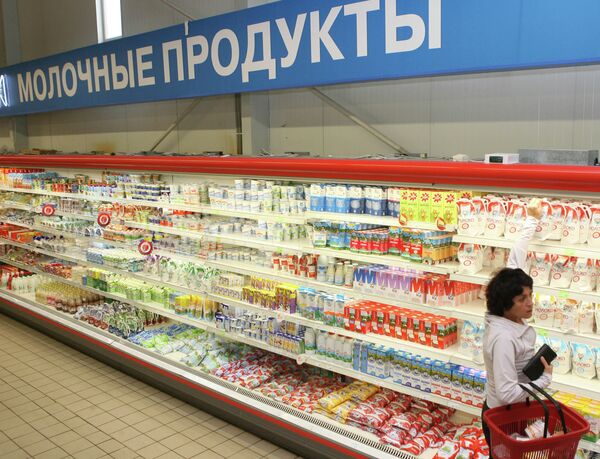 Russia’s consumer rights watchdog said Monday it was ordering a ban on the import of Lithuanian dairy products, the latest twist in an escalating spat between the two countries.

MOSCOW, October 7 (RIA Novosti) – Russia’s consumer rights watchdog said Monday it was ordering a ban on the import of Lithuanian dairy products, the latest twist in an escalating spat between the two countries.

Lithuania, which currently holds the rotating presidency of the European Union, has angered Moscow by its strong support for closer ties between Brussels and former Soviet states.

“After investigating dairy products produced by the Lithuanian Republic we have found many legislative violations in the field of consumer rights… and in human disease control and prevention,” said a statement posted online by Rospotrebnadzor, Russia's consumer rights watchdog.

The head of Rospotrebnadzor Gennady Onishchenko told journalists on Monday that dairy imports from the Baltic country were insignificant, and that their absence wouldn't cause problems. "For the Russian economy this isn't a priority. Lithuania doesn't affect our weather," said Onishchenko.

The Russian move follows a temporary tightening of customs checks for Lithuanian goods at the Russian border in September that reportedly caused long delays, and millions of euros in losses for Lithuanian exporters.

Lithuanian President Dalia Grybauskaite told the United Nations last month that “milk wars” were an attempt by Moscow to exert pressure on Lithuania. The country’s foreign minister threatened Moscow on Wednesday with a blockade of Kaliningrad, Russia’s European exclave that has a western border with Lithuania.

Relations between the two countries are souring ahead of a highly anticipated summit in November, hosted by Vilnius, where several former Soviet countries, most notably Ukraine and Moldova, are expected to sign free trade agreements with the EU that will bind them closer to Western Europe.

The Kremlin aspires to include states like Ukraine and Moldova in a Moscow-led Customs Union with Russia, Kazakhstan and Belarus.