Israel: No Dispute Over Iran Timeframe 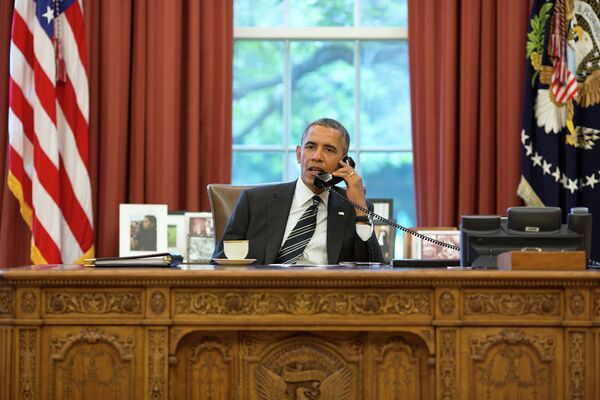 Israel and the U.S. are on the same page regarding the need to prevent Iran from obtaining nuclear weapons, an official said Saturday night after President Barack Obama told The Associated Press that Iran is at least a year away from the bomb.

JERUSALEM, October 6 (Ian Deitch, Associated Press) - Israel and the U.S. are on the same page regarding the need to prevent Iran from obtaining nuclear weapons, an official said Saturday night after President Barack Obama told The Associated Press that Iran is at least a year away from the bomb.

Obama, in a wide-ranging interview with AP, disclosed that U.S. intelligence agencies believe Iran continues to be a year or more away from having the capability to make a nuclear weapon. Israel contends Tehran is on a faster course and could be just months away from breakout capacity.

The remarks come after Prime Minister Benjamin Netanyahu returned from the United States, where Iran was the main topic in talks with President Barack Obama and his address at the United Nations.

Iran's new President Hassan Rouhani has taken a softer tone toward the West in an outreach that Israel dismisses as a trick aimed at removing crippling economic sanctions against Tehran over its nuclear program.

An official in Netanyahu's office said Saturday night that Obama and Netanyahu "see eye to eye on the need to prevent Iran from getting nuclear weapons."

"The critical time that the prime minister refers to is not the time for completing production of a nuclear bomb but rather the time needed for Iran to complete enriching uranium, which is the most important component in preparing a nuclear weapon," he said regarding the time frame issue.

"If Iran decides to complete enriching uranium it can do so within a few weeks of the start day," he said on condition of anonymity, because he is not allowed to discuss the issue with the media.

Israel views a nuclear-armed Iran as a threat to its very existence, citing Iran's repeated calls for Israel's destruction, its long-range missile program and its support for violent anti-Israel groups like the Hezbollah in Lebanon. Iran insists that its nuclear program is for civilian use.

"There is no reason why Iran, which claims it wants nuclear energy just for peaceful purposes, should maintain the ability to enrich uranium, which allows for the development of material necessary for building a bomb," the Israeli official said.

Rouhani recently delivered a conciliatory speech at the United Nations in which he said Iran has no intention of building a nuclear weapon and declared his readiness for new negotiations with world powers.

At the end of the visit, Rouhani and Obama held a 15-minute phone call as the Iranian leader was traveling to the airport. It was the first conversation between the nations' leaders in 34 years and raised hopes that a breakthrough on the nuclear issue could portend even deeper ties between the United States and Iran.

Netanyahu has greeted Rouhani's outreach with deep skepticism, expressing fears that Iran will use upcoming nuclear talks as a ploy to get the world to ease painful economic sanctions while secretly pressing forward with its nuclear program.

In Iran, Foreign Minister Mohammad Javad Zarif said the exchanges with Washington already have paid dividends by opening opportunities to negotiate a "win-win" nuclear deal that would allow Tehran to maintain its uranium enrichment but provide greater assurances the program remain peaceful.

But Iran has not yet given specifics on what it would offer in exchange for possible lifting of Western sanctions when nuclear talks with world powers resume later this month in Geneva.

Zarif also disputed Obama's remarks to AP that Iran is more than a year from reaching the capacity to build a nuclear weapon. Zarif repeated Iran's claims that it does not seek nuclear arms and urged the U.S. and its allies not to allow Israeli Prime Minister Benjamin Netanyahu to block potential progress in nuclear talks.