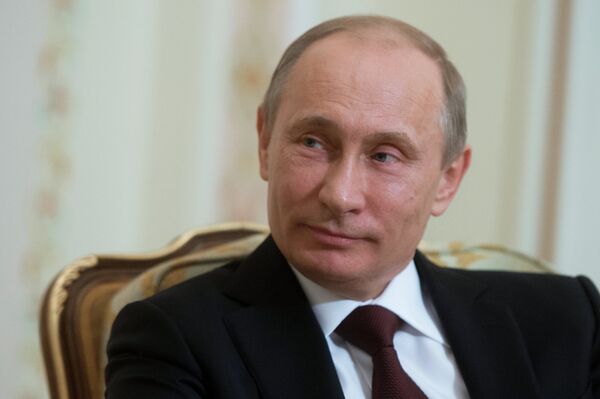 Russian activists and lawmakers announced Tuesday that they plan to nominate Russian President Vladimir Putin for the Nobel Peace Prize.

Supporters of the initiative say they want to see the Russian leader recognized for his efforts in mediating the ongoing civil war in Syria.

Crooner-cum-State Duma deputy Iosif Kobzon said Putin was “more worthy” of the award than 2009 recipient US President Barack Obama, arguing that the US leader had initiated aggressive military action in Syria while his Russian counterpart had made efforts to prevent the war from escalating.

Speaking to journalists, Beslan Kobakhiya, vice president of the International Academy of Spiritual Unity and Cooperation, described Putin as the “person of the year,” saying that he had proven his commitment to global peace through personal example.

The academy said that its letter nominating Putin for the award was received by the Nobel Committee on September 20.

The nominating group said it had not consulted Putin on the idea, but Kobzon, a fervent Putin loyalist, explained the president probably wouldn’t comment “because of his humility.”

Russian media have been circulating rumors for several weeks about Putin’s possible Nobel nomination for his role in the Syrian conflict.

Presidential administration spokesman Dmitry Peskov refused to comment on the issue in a recent interview with Russia’s Izvestia daily, saying that tangible results in the Middle East should be reached before any “triumphant statements” could be made.

Putin has drawn much international praise for his government’s efforts to prevent a US-led punitive bombing campaign against Syria over the Middle Eastern nation’s alleged deployment of chemical weapons.

Critics of Russia have argued, however, that the Kremlin is primarily motivated by its desire to protect strategic interests in the region and that it has been supplying weapons to Bashar Assad’s regime.

The Nobel Committee formally does not comment on the names of nominees – or the people who nominated them – for 50 years after the prize is awarded.

Three other Russians have won the Nobel Peace Prize since the honor was founded in 1901. The most recent winner was Soviet leader Mikhail Gorbachev in 1991.

Former recipients are allowed to put forward and support new candidates, but the nominating group said it had no plans to consult Gorbachev about Putin’s suitability for the award.

The Nobel Committee’s deadline for 2014 submissions expires on February 1. The Peace Prize winner will be announced in October and presented with the award in a ceremony on December 10 in Oslo, Norway.