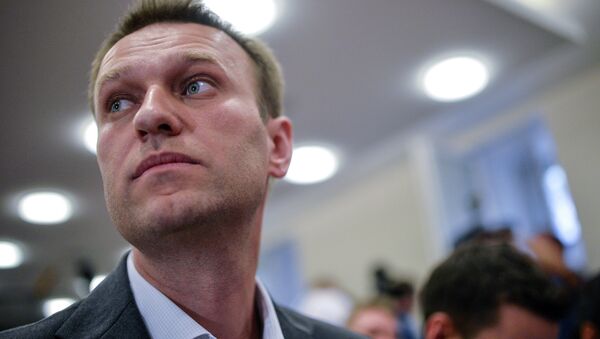 © Sputnik / Vladimir Astapkovich
/
Go to the mediabank
Subscribe
International
India
Africa
The Kremlin is not considering the possibility of offering a position in the echelons of power to opposition leader Alexei Navalny until he proves himself as a capable politician, the head of the presidential administration said.

MOSCOW, October 1 (RIA Novosti) – The Kremlin is not considering the possibility of offering a position in the echelons of power to opposition leader Alexei Navalny until he proves himself as a capable politician, the head of the presidential administration said.

“Why on Earth should the authorities discuss something like this? On what grounds?” Sergei Ivanov said in an interview published Tuesday by four Russian media outlets, including Rossiskaya Gazeta newspaper.

“For that, one has to prove that he is capable of doing something. And, for starters, one has to win something, at least the elections for the head of a municipal council…but nothing like that has happened,” Ivanov said, referring to Navalny’s lack of political experience and his recent loss in the race for Moscow mayor.

Navalny, a politically ambitious anti-corruption blogger who helped organize large-scale anti-Kremlin protests in Moscow in 2011-2012, came in second place in September 8 elections, receiving an impressive 27.2 percent of the vote versus the 51.3 percent taken by former Kremlin administration head and incumbent Mayor Sergei Sobyanin.

The Kremlin chief of staff acknowledged the effectiveness of Navalny’s election campaign but downplayed its significance, citing low electoral turnout caused by the “stable political climate in the country.”

“I agree that Navalny has very effectively mobilized his electorate and the protest electorate in general,” Ivanov said. “But you have to understand that 27 percent of those who came to polling stations – it’s all relative.”

“Almost 70 percent of Muscovites simply ignored the elections, but I repeat – that's normal and we should not make a tragedy out of this,” the Kremlin official said.

“On the contrary, I believe it’s a positive rather than a negative signal that means that society is more or less stable,” Ivanov concluded.