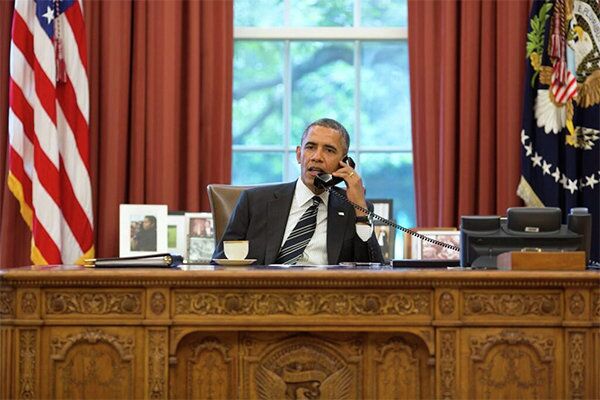 © The White House / Pete Souza
Subscribe
US President Barack Obama announced Friday that he spoke by telephone with Iranian President Hassan Rouhani, the first conversation between leaders of the two countries in more than three decades and one that follows a series of overtures from both sides suggesting a possible rapprochement over Tehran’s nuclear program.

WASHINGTON, September 27 (RIA Novosti) – US President Barack Obama announced Friday that he spoke by telephone with Iranian President Hassan Rouhani, the first conversation between leaders of the two countries in more than three decades and one that follows a series of overtures from both sides suggesting a possible rapprochement over Tehran’s nuclear program.

“Just now, I spoke on the phone with President Rouhani of the Islamic Republic of Iran,” Obama said in a dramatic announcement at the White House. “The two of us discussed our ongoing efforts to reach an agreement over Iran’s nuclear program.”

“We’re mindful of all the challenges ahead,” he added. “The very fact that this was the first communication between an American and Iranian president since 1979 underscores the deep mistrust between our countries, but it also indicates the prospect of moving beyond that difficult history.”

Obama expressed cautious optimism that the United States and Iran could negotiate a deal over Tehran’s nuclear program that would “bring relief from the comprehensive international sanctions that are currently in place” against Iran.

“I believe we can reach a comprehensive solution,” Obama said.

The unexpected Obama-Rouhani conversation came hours after the new Iranian president, wrapping up a trip to the UN General Assembly in New York, called the United States a “great” nation, a sharp reversal from his predecessors that buoyed hopes that the two governments can stop the escalation of tensions.

“I want it to be the case that this trip will be a first step, and a beginning for better and constructive relations with countries of the world as well as a first step for a better relationship between the two great nations of Iran and the United States of America,” Rouhani told a news conference at a hotel near UN headquarters, The Associated Press reported.

A senior Obama administration official told reporters on a conference call Friday that the conversation resulted from an American offer earlier in the week to arrange a handshake between the two leaders on the margins of the UN General Assembly.

The White House said the Iranians declined that offer, saying it would be “too complicated” for Rouhani back home. But the administration official said that the Iranian delegation reached out to their American counterparts Friday morning to say that Rouhani wanted to speak with Obama by telephone before he left New York.

The official described the tone of Friday’s telephone conversation as “quite cordial” and that both leaders “expressed a determination to try to resolve [the nuclear] issue peacefully and expeditiously.”

Obama and Rouhani spoke through an interpreter, though the Iranian leader spoke English in concluding the conversation by telling his American counterpart to “have a nice day,” the official said. Obama responded with a parting phrase in Farsi.

News of the conversation emerged minutes prior to Obama’s announcement on Rouhani’s Twitter feed, where Rouhani said Obama ended their call with the Farsi phrase “Khodahafez,” or “May God protect you.”

It was one over several Tweets about the phone call posted on Rouhani’s feed Friday afternoon.

“We’ll continue to watch his Twitter feed,” the official said.

Tehran and Washington severed diplomatic ties following the overthrow of Iran’s US-backed leader by Islamic revolutionaries in 1979 and have been locked in a stalemate for years over the Iranian government’s nuclear ambitions.

Rouhani, however, has made recent overtures indicating he is interested in greater engagement with the United States. In an op-ed published last week in The Washington Post, he suggested Iran would like to “move beyond impasses” in its relations with Washington.

Washington has repeatedly stated that Iran must not be allowed to obtain a nuclear weapon, a position Obama restated Friday. He said however, that the United States respects “the right of the Iranian people to access peaceful nuclear energy in the context of Iran meeting its [international] obligations”

“I believe we’ve got a responsibility to persuade diplomacy, that we have a unique opportunity to make progress with the new leadership in Iran,” Obama said, though he said a path to a “meaningful agreement” will be difficult.

Addressing the UN General Assembly in New York earlier this week, Rouhani reiterated Tehran’s position that its nuclear activities are not aimed at producing a nuclear weapon but only at developing nuclear energy, a position the West has long said it does not believe.

Israeli Prime Minister Benjamin Netanyahu earlier this week called Rouhani’s rhetorical overtures on the nuclear issue a “cynical” ploy to stall for time while the Islamic republic pushes ahead with nuclear weapons development.