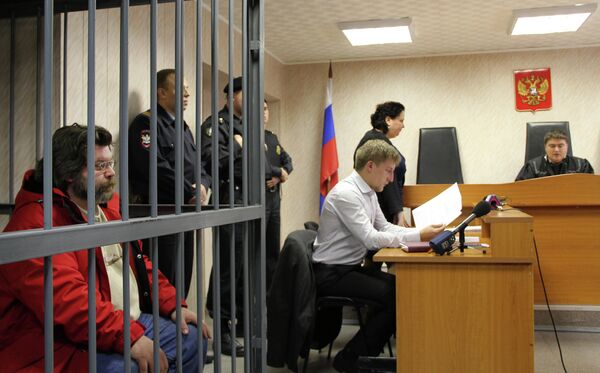 © RIA Novosti . Anastasia Ishenko
/
Go to the mediabank
Subscribe
International
India
Africa
A Russian court ruled to put a group of foreign and Russian Greenpeace activists behind bars for two months Thursday over their protest at an offshore oil drilling platform in the Arctic last week, the environmental group said.

NB: Updated with new figures for arrested and detained

MOSCOW, September 26 (RIA Novosti) – A Russian court ruled to put a group of foreign and Russian Greenpeace activists behind bars for two months Thursday over their protest at an offshore oil drilling platform in the Arctic last week, the environmental group said.

Thirty people of 19 different nationalities were detained when Russian border guards stormed the Greenpeace icebreaker Arctic Sunrise on September 19, a day after two activists scaled a Russian oil rig in the Pechora Sea to protest against the potential impact of drilling on the Arctic’s fragile ecosystem. They are now under investigation for piracy, which carries a maximum jail sentence in Russia of 15 years. No charges have yet been brought in the case.

On Thursday, a district court in the northern Russian city of Murmansk denied bail to the ship’s US captain Pete Willcox and 20 other activists who were on board the Arctic Sunrise and said that they could all be kept in custody until November 24, Greenpeace said. Court decisions on the continuing detention of the remaining activists are expected to continue throughout the day.

The court also ruled that Denis Sinyakov, a prominent photographer who Greenpeace says was contracted to take pictures of the protest, could also be kept behind bars for up to two months. The chief editor of Russian news website Lenta.ru said Thursday that Sinyakov was also on a reporting assignment for Lenta.ru while on board the Arctic Sunrise, according to Russian website Russkaya Planeta.

Russia’s Investigative Committee said in a statement Thursday morning that it had requested the court to sanction two-month custody for all those detained on the Arctic Sunrise, although the powerful law enforcement body later appeared to backtrack, with spokesman Vladimir Markin saying that he “did not exclude” that the activists could be released from prison ahead of a trial.

The Murmansk court ruled Thursday that eight Greenpeace activists were to be held in custody for three days before a new court hearing, Greenpeace said. It was not immediately clear why the court had ruled differently in their cases.

Greenpeace said Thursday that its lawyers would appeal against the court’s ruling to keep the activists in custody.

The 30 people on board the Arctic Sunrise were transferred to a detention facility in Murmansk earlier this week after their ship was towed into the city’s port. They have refused to answer questions from investigators, citing their rights under the Russian constitution, the Investigative Committee said.

Caught in the Crossfire

The case of Sinyakov attracted particular criticism Thursday, with the arrest of the former Reuters news agency photographer being condemned by Russia’s Journalists’ Union as well as international media freedom non-governmental organization Reporters Without Borders.

“His detention constitutes an unacceptable violation of freedom of information,” Reporters Without Borders said in a statement posted online. “If Russia’s constitutional guarantees have any meaning, neither Greenpeace’s peaceful protest nor, even more so, Sinyakov’s journalistic coverage of the protest constitute a crime.”

During the court hearing prior to his arrest, Sinyakov was clear about his reasons for being on board the Arctic Sunrise. “You can see my photographs in Russian and international news media. All my cameras have been confiscated,” Sinyakov said, Greenpeace tweeted. “My criminal activity is journalism. I will continue to report.”

Prominent Russian journalists and photographers attended a picket against Sinyakov’s arrest outside the Investigative Committee’s headquarters in Moscow on Thursday evening, and some prominent Russian news organizations, including radio station Ekho Moskvy, Dozhd online TV channel, Novaya Gazeta newspaper and Lenta.ru news website, said they would blackout photographs on their websites and in their publications Friday to show their solidarity with Sinyakov, Greenpeace said on Twitter.

The Face of Things to Come

The target of the Greenpeace activists was the Prirazlomnaya oil rig, owned by a subsidiary of Russian state-owned gas giant Gazprom, and a flagship project in Russia’s efforts to kick-start its offshore drilling activities in the Arctic. Foreign oil companies including Exxon Mobil, Eni and Statoil have signed lucrative agreements with state-owned oil monolith Rosneft to work in Russia’s Arctic region.

Greenpeace insists that its protest was peaceful, and has condemned the use of force by armed Russian border guards in black balaclavas, who fired warning shots at the Arctic Sunrise and then seized the vessel, descending onto its deck by helicopter.

"The Russian authorities are trying to scare people who stand up to the oil industry in the Arctic, but this blatant intimidation will not succeed,” said Kumi Naidoo, head of Greenpeace International, in a statement released Thursday as the news of the first court rulings became known. "We call on people in Russia and around the world to stand with our activists and defend their right to peaceful protest."

Willcox, the Arctic Sunrise’s captain who, according to Russian border guards, refused to steer the ship to Murmansk under the direction of Russian law enforcement officers, is something of a veteran of Greenpeace’s clashes with national governments. In 1985 he was captain of Greenpeace’s campaign ship the Rainbow Warrior when it was sunk in a New Zealand harbor by French special forces, leading to the death of one freelance photographer on board.

Russian President Vladimir Putin said Wednesday that the actions of the Greenpeace activists clearly did not amount to piracy, but that they were illegal.

“It’s completely obvious that they breached international law by coming within dangerous proximity of the oil rig. There was a threat to people’s lives,” Putin told a conference dedicated to Arctic issues.