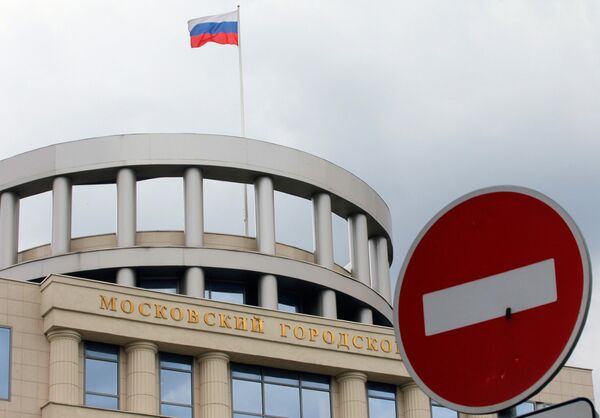 © RIA Novosti . Vitaliy Belousov
/
Go to the photo bank
Subscribe
The protracted trial into the high-profile murder of Russian journalist Anna Politkovskaya was postponed Wednesday due to a medical quarantine at a detention facility housing one of the defendants.

MOSCOW, September 25 (RAPSI/RIA Novosti) – The protracted trial into the high-profile murder of Russian journalist Anna Politkovskaya was postponed Wednesday due to a medical quarantine at a detention facility housing one of the defendants.

The Moscow City Court adjourned the hearings until October 1 after the defendant, former police officer Sergei Khadzhikurbanov, was not brought to the trial.

A document presented to the court by the pre-trial detention facility where he is being held said the quarantine was a result of an infectious illness, but did not specify which one or how long the quarantine would last.

Politkovskaya, who wrote mostly for the opposition-leaning Novaya Gazeta newspaper, was shot and killed in her apartment building on October 7, 2006. She was a vocal critic of both the Kremlin and authorities in the war-scarred Russian republic of Chechnya, in particular for their alleged human rights abuses.

Apart from Khadzhikurbanov, the remaining four suspects are brothers Rustam, Ibragim and Dzhabrail Makhmudov, and their uncle Lom-Ali Gaitukayev, who is accused of organizing the murder at the behest of an unidentified individual for $150,000.

One suspect, former police officer Dmitry Pavlyuchenkov, was convicted in connection with the killing in a separate trial in December 2012; he reached a plea bargain with investigators and has testified against the other suspects in the case.