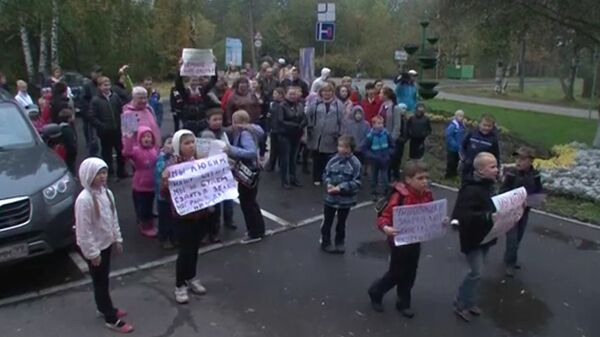 © RIA Novosti/Avrora
Subscribe
Dozens of school students, accompanied by parents and teachers, stormed a district administration office in northern Moscow on Thursday to protest the closure of their public school and held lessons in the seized building, media reported.

MOSCOW, September 19 (RIA Novosti) – Dozens of school students, accompanied by parents and teachers, stormed a district administration office in northern Moscow on Thursday to protest the closure of their public school and held lessons in the seized building, media reported.

The sole school in the suburb of Molzhaninovo – which comprises elementary, middle and high school, and which was recently renovated at a cost of 12 million rubles ($380,000), according to parents – was closed by bailiffs Wednesday over building safety concerns, according to the bailiff service’s website.

“They scared the kids, shouted at them… One girl could not be calmed down for an hour and a half afterward,” unnamed parents told Rusplt.ru news website Thursday.

District authorities offered the 150 students places in another school, located 15 kilometers away and reachable by Moscow’s notoriously congested Leningradskoye highway.

However, the parents were not satisfied with the offer and vented their frustration by storming the administration office, accompanied by teachers and kids, BBC Russian Service reported.

Students brandished placards bearing the slogan “We Want to Study Here,” according to photos from the scene published by Rusplt.ru.

The district’s acting head was cited by Rusplt.ru as saying after the storming of the building that lessons will be held in the district administration office until a new school building is opened in 2014.

District officials said earlier that the decades-old school building – which, until 2012, was reportedly Moscow’s sole general education establishment with pit toilets – was dangerous for students.

However, they did not comment on the recent renovation work, or the fact that the building was deemed safe enough to host a polling station for regional elections on September 8.

Several parents who spoke to Rusplt.ru alleged that the school was suddenly slated for demolition because unspecified real estate developers were interested in the land on which it stands.

The Russian school system is currently undergoing dramatic belt-tightening, with numerous public schools being merged in the name of efficiency as part of the educational authorities’ campaign to cut state expenses.