Bolshoi’s Filin Back in Moscow After Acid Attack Treatment 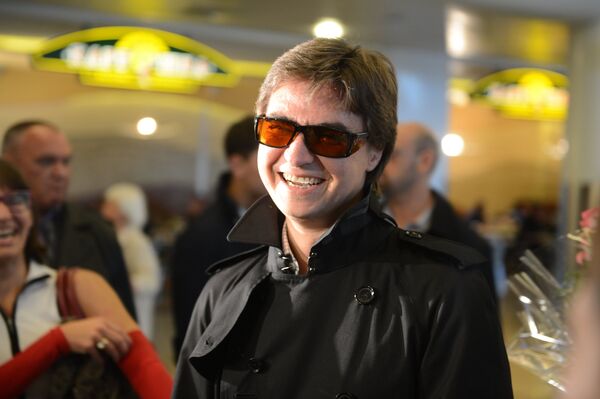 © RIA Novosti . Mikhail Voskresenskiy
/
Go to the photo bank
Subscribe
The Bolshoi Theater’s ballet artistic director Sergei Filin, who suffered serious injuries in an acid attack in January, returned to Moscow on Saturday after six months of treatment in a German hospital.

MOSCOW, September 14 (RIA Novosti) – The Bolshoi Theater’s ballet artistic director Sergei Filin, who suffered serious injuries in an acid attack in January, returned to Moscow on Saturday after six months of treatment in a German hospital.

“I will be going back to Germany, can’t say they discharged me,” Filin said. “Will have an operation on my right eye, my left [eye] can see, watch the stage.”

A masked assailant threw concentrated acid into Filin's face on January 17 near his apartment building in Moscow and fled the scene, leaving the artistic director for the theater’s ballet division with third-degree burns to his face and eyes.

The artistic director has undergone more than 20 eye surgeries, and German doctors said Friday that Filin’s eyesight had improved significantly. After losing over 90 percent of his vision in his left eye and becoming totally blind in his right eye, Filin now has 80 percent of his left eye vision restored and can distinguish big objects with his right eye, the statement said.

“As you can see, I can move around, can see you,” Filin told journalist at a Moscow airport.

Three men were arrested in March in connection with the attack, including Bolshoi Ballet soloist Pavel Dmitrichenko, accused of ordered the attack, Yury Zarutsky, the alleged attacker, and Andrei Lipatov, who reportedly drove Zarutsky to Filin’s apartment building to carry out the attack.

The acid attack scandal has tarnished the reputation of Russia’s most renowned ballet company.