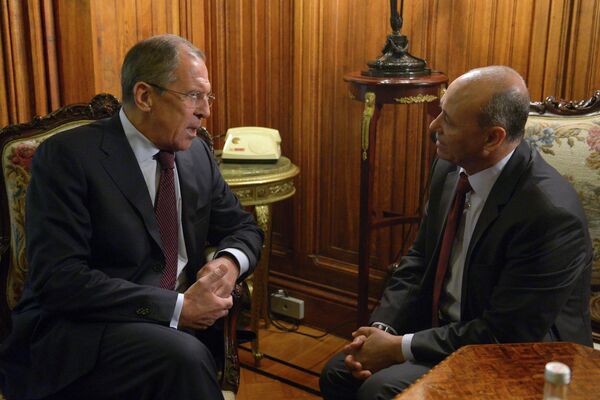 Russia is hailing the “good prospects” of resuming arms supplies to Libya, Russia’s Foreign Minister said Tuesday after a meeting with his Libyan counterpart that was part of Moscow’s efforts to restore military and business ties with the war-torn North African nation.

MOSCOW, September 10 (RIA Novosti) – Russia is hailing the “good prospects” of resuming arms supplies to Libya, Russia’s Foreign Minister said Tuesday after a meeting with his Libyan counterpart that was part of Moscow’s efforts to restore military and business ties with the war-torn North African nation.

“We see good prospects in developing military [and] technical cooperation, including supplies of arms and necessary equipment, including training of personnel for the Libyan army and police,” Sergei Lavrov said Tuesday after a meeting with his Libyan counterpart, Mohamed Abdelaziz.

After NATO-assisted Libyan rebels ousted and killed Gadhafi in 2011 and the UN imposed an embargo on arms supplies, Russia lost about $4 billion in military sales, according to Russian arms export monopoly Rosoboronexport and the Federal Service for Military-Technical Cooperation.

Russia has sought to restore military cooperation with Libya’s new government, although the country is still mired in tribal feuds, crime and political instability. Libya’s police and military are struggling to maintain security and rein in former rebels who have turned the country’s south into a smuggling route for weapons that reach al-Qaeda-linked militants in the Sahara, according to the United Nations and Western media reports.

Earlier this month, Lavrov addressed the smuggling problem and migration of Libyan militants to other conflict zones in Africa and the Middle East. He quoted a UN Security Council report released in April that said illicit transfers of arms from Libya violated a UN embargo and involved more than 12 countries.

Lavrov and Abdelaziz also discussed the resumption of business ties in other fields, and the latter “welcomed” the readiness of Russian companies to return to Libya.

Lavrov said that Tripoli supports Moscow’s rejection of violence in solving problems in the Middle East.

"We are united with Libya in rejecting any terrorist methods of solving political problems," Lavrov said in an apparent reference to Moscow’s harsh criticism of US President Barack Obama’s plans for a military operation in Syria.

Russia and Libya “stand for solutions to the region’s problems, [solutions] based on respecting international law, sovereignty and independence of the nations,” Lavrov said.

A Moscow-based Mideast analyst said that Russia’s renewed attempts to sell arms to Libya are futile and that the Kremlin should “forget” about the Gadhafi-era deals. “We have to forget them, and forget them for good,” Yevgeny Satanovsky told RIA Novosti. The deals “cost us too much, brought us no good, and their worth is nil.”

In March, Russian oil company Tatneft, announced that it was returning to its operations in Libya that were abandoned at the start of the anti-Gadhafi revolution. Russia’s sixth-largest oil company was also its first to enter Libya in 2006, when it secured acreage in the Ghadames basin in Block 82/4. It also has rights to other blocks in the Ghadames and Sirte basins.