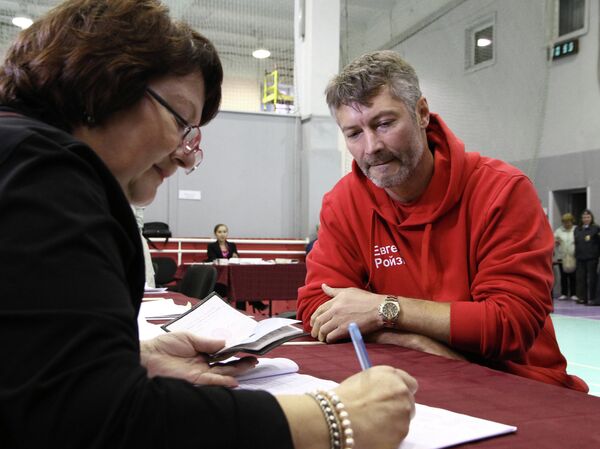 Yevgeny Roizman ran for mayor of the Urals city Yekaterinburg as a member of billionaire Mikhail Prokhorov’s Civil Platform party. The businessman and art collector has led hundreds of vigilante stings against drug pushers in Yekaterinburg since 1999 and served a term in Russia’s lower house of parliament in 2003-2007.

He runs the City Without Drugs foundation – a clinic for drug addicts that has won praise as a successful non-governmental rehabilitation center. The foundation has also drawn criticism for using unorthodox methods, including handcuffing and underfeeding patients, forcing them to do menial jobs and keeping them for months against their will.

“That’s it. Finish,” he wrote in his LiveJournal blog Sunday afternoon adding that he “won” according to exit polls, but providing no poll figures.

“The question now is how they will count” the votes, he said referring to alleged vote rigging and ballot staffing that he claimed earlier his Kremlin-backed opponent will use. “Thanks a lot to Yekaterinburg for trust and support.”

The poll commissioned by his campaign and published by the Znak.com news website said that Roizman got 36.9 percent of the vote, while his rival, Deputy Governor Yakov SIlin, got 26.8 percent.

The Yekaterinburg City Election Commission said, however, that a preliminary count gave Roizman 32 percent and 30 percent to Silin.

This year, Roizman has had a number of run-ins with law-enforcement agencies.

In May, investigators opened a criminal case against his clinic over allegations of patients’ unlawful “imprisonment” and, earlier this month, Roizman said police seized 45 icons from his museum and raided a restoration workshop that worked with it.

An art historian by education, Roizman owns a museum of icons by Old Believers, a splinter Russian Orthodox Christian group whose followers helped settle the Urals and Siberia in the mid-17th century.

Roizman has also claimed that his attempts to re-enter the State Duma in 2007 and 2011 were stymied by the Kremlin for his overly independent political views.