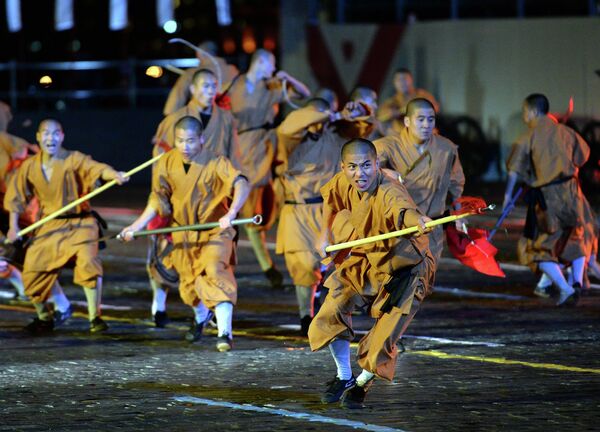 Russians can learn a lesson on spiritual strength from Chinese warrior monks, head of the Russian Orthodox Church said after meeting with their leader.

MOSCOW, September 5 (RIA Novosti) – Russians can learn a lesson on spiritual strength from Chinese warrior monks, head of the Russian Orthodox Church said after meeting with their leader.

Patriarch Kirill met Wednesday night with a delegation of monks from the Shaolin Monastery in China, famous for its incorporation of Chinese martial arts and gymnastics – known as Shaolin Chi Kung – in its spiritual training. The delegation, headed by the vice president of the Chinese Buddhist Association Shi Yongxin, is in Moscow to participate in the Spasskaya Bashnya international military music festival.

The patriarch praised the self-discipline produced by the practice of martial arts, the Russian Orthodox Church’s press service said in a statement.

“The wonderful combat that originated in the depths of your [the Shaolin] monastery is a very good illustration that the strength of a person depends on the strength of his soul,” he said. “From historical examples we know that neither the most well-armed people nor the richest won wars, but people that were spiritually strong.”

It was the second time the two religious leaders have met. Patriarch Kirill first met Shi Yongxin on a visit to China in May.