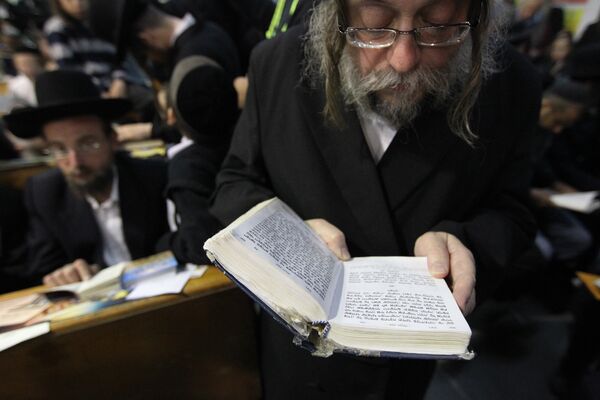 © RIA Novosti . Valeriy Melnikov
/
Go to the photo bank
Subscribe
A record number of Jewish pilgrims have reportedly gathered in a central Ukrainian town to celebrate the Jewish New Year, despite the erection of a crucifix near a Hasidic prayer site and alleged vandalism.

KIEV, September 5 (RIA Novosti) – A record number of Jewish pilgrims have reportedly gathered in a central Ukrainian town to celebrate the Jewish New Year, despite the erection of a crucifix near a Hasidic prayer site and alleged vandalism.

Some 27,000 pilgrims – many of them wearing black hats and carrying prayer boxes – have arrived in Uman in the central Cherkassy region for a three-day celebration of the start of year 5774 in the Jewish calendar, local police told the Unian news agency Thursday. Unian said that in 2011, some 23,000 pilgrims came to the site.

Uman is the burial site of Rabbi Tori Nachman, a Jewish scholar and sage who founded the Breslov Hasidic movement and died in 1810. Shortly before his death, Nachman urged his followers to pray at his grave ahead of Rosh Hashanah, the Jewish New Year.

The prayer meeting has grown into a massive annual Jewish pilgrimage that irks some nationalists and Christians in predominantly Christian Ukraine. Earlier this year, the so-called Council of Public Organizations of Uman installed a crucifix on a lake shore hear Nachman’s grave where Hasids hold one of their religious ceremonies, Ukrainian media reported.

The Council, established in 2012 to oppose what it called “Hasidic corruption and occupation,” claimed in mid-August that the cross was vandalized and covered with an inscription in Hebrew that allegedly read “Do not provoke God’s wrath,” Nezavisimaya Gazeta said.

But Jewish community leaders agreed to move the ceremony away from the crucifix that will be guarded by police officers, Gazeta.ua said Tuesday.

An Uman activist with the Ukrainian ultranationalist party reportedly said that Hasids “colonized” his town and said his party will hold an anti-Hasidic rally next week.

“Hasids have colonized Uman with the active participation of local authorities,” Yury Botnar told the Jewish News Agency Wednesday. He said an “Uman Without Hasids” rally is scheduled for September 12, the agency said.

Nachman chose to die in Uman after he learned about the “martyrdom” of thousands of Jews who were massacred there by Cossacks in 1768, according to the Ukraine Jewish Heritage website. Nachman was an offspring of Israel ben Eliezer, the 18th-century Jewish scholar who founded Hasidism, it said.