Russians Picket US Consulate Over Interference in Syria 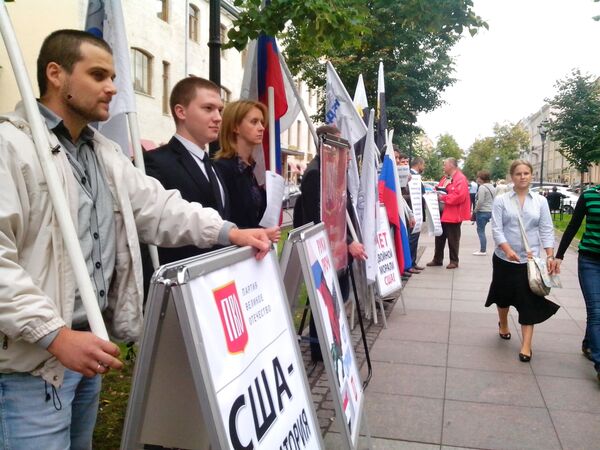 © RIA Novosti . Kirill Chulkov
Subscribe
Nearly two dozen Russians picketed outside the US Consulate in St. Petersburg on Monday to show outrage at Washington’s interference in the Syrian crisis.

ST. PETERSBURG, September 2 (RIA Novosti) – Nearly two dozen Russians picketed outside the US Consulate in St. Petersburg on Monday to show outrage at Washington’s interference in the Syrian crisis.

The demonstrators denounced, as a “planned provocation,” US allegations that the Syrian government had used chemical weapons against civilians, a claim that the United States is considering as justification for launching an American military attack in Syria.

The protestors’ denunciation echoed one made by Russian President Vladimir Putin on Saturday that the US allegations amounted to a “provocation” to drag other countries into the conflict.

Russian Foreign Minister Sergei Lavrov said Monday that the evidence the United States had presented to Russia regarding Syrian government forces’ alleged use of chemical weapons was inconclusive.

The demonstrators outside the US Consulate held up signs saying, “Hands Off Syria” and “Syria: Destruction the American Way.” They dubbed their sanctioned protest “US – Laboratory of Death.”

“The US teaches the principles of freedom of speech and democracy to the whole world, but ignores them itself. This is the opinion of Russian society,” one protestor said.

US President Barack Obama said Saturday that his country was considering a “limited” attack in Syria. According to the United Nations, more than 100,000 people have died so far in the two-year civil war.

The United States on Friday released a report saying Syria’s government was responsible for a chemical attack that purportedly killed hundreds of civilians in a Damascus suburb late last month. The Syrian regime has consistently denied that allegation.