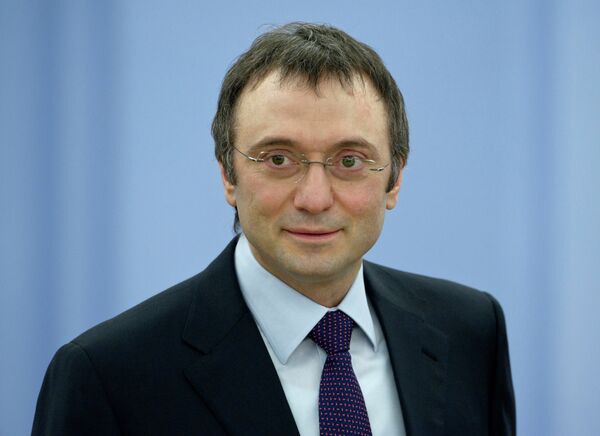 © RIA Novosti . Sergei Guneev
/
Go to the photo bank
Subscribe
Investigators in Belarus reportedly opened a criminal case Monday against Russian billionaire Suleiman Kerimov, the biggest shareholder in fertilizer giant Uralkali, which is embroiled in a commercial battle with its Belarusian counterpart.

MOSCOW, September 2 (RIA Novosti) – Investigators in Belarus reportedly opened a criminal case Monday against Russian billionaire Suleiman Kerimov, the biggest shareholder in fertilizer giant Uralkali, which is embroiled in a commercial battle with its Belarusian counterpart.

Minsk is seeking Kerimov’s detention, including through an international arrest warrant, on charges that carry a possible sentence of up to 10 years in prison, the Belarusian state news agency BelTA reported.

The arrest warrant is an escalation of the criminal case facing businessmen linked to Uralkali after the company’s CEO, Vladislav Baumgertner, was arrested last week in Minsk's airport following a reported invitation from Belarusian Prime Minister Mikhail Myasnikovich to attend a official meeting.

Anatoly Kucherena, Kerimov’s lawyer, said Monday that his client was not hiding from anyone and was prepared to give “any explanation.”

The chairman of Uralkali’s board of directors, Alexander Voloshin, last week described the arrest of Baumgertner as “outrageous” and the charges against him as “absurd.” Russian First Deputy Prime Minister Igor Shuvalov said last week that the situation around Baumgertner was "rather strange."

President Vladimir Putin’s spokesman Dmitry Peskov said Monday that the charges against Kerimov, who is also a senator in Russia's upper house of parliament, needed to be fleshed out. “Of course, we need to clarify all the circumstances and obtain information about what Suleiman Kerimov is really accused of – this is very important,” Peskov told Russian radio station Kommersant FM.

Kerimov owns 21.75 percent of Uralkali’s shares and was reportedly invited to Minsk last week with Baumgertner for the meeting that preceeded Baumgertner's arrest and footage of him in handcuffs broadcast on Belarusian television. Four other Uralkalki executives are wanted on Belarusian arrest warrants.

Investigators in Minsk also allege that Kerimov has violated Russian law and have promised to hand over evidence proving their allegations to Russia’s Prosecutor General’s Office, BelTA reported.

While Russia has consistently provided subsidized exports and cheap loans to Belarus, ruled by strongman leader Alexander Lukashenko, the two countries have a long history of quarreling over economic questions. Lukashenko said last year that unspecified "Russian oligarchs" had offered him a $5 billion bribe to sell Belaruskali.

Belaruskali, one of Belarus’ largest companies, is a key source of revenue for Minsk. The company said Friday that it was suspending operations at two of its four mining complexes inside the country because of the difficult situation on the world potash market, according to media reports.