Ukraine Shows Willingness to Negotiate With Russia on Trade 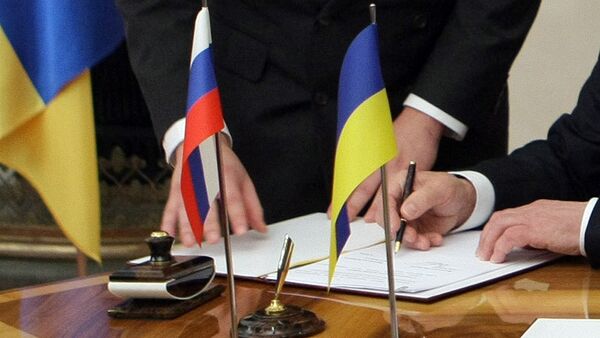 Ukraine, in an effort to stave off mounting trade pressure from Russia, signaled willingness at a Cabinet meeting on Wednesday to negotiate trade agreements with its eastern neighbor.

KIEV/MOSCOW, August 28 (RIA Novosti) – Ukraine, in an effort to stave off mounting trade pressure from Russia, signaled willingness at a Cabinet meeting on Wednesday to negotiate trade agreements with its eastern neighbor.

“It’s absolutely understood that each side should take into account its own benefits and risks,” Ukrainian Prime Minister Mykola Azarov said. However, he added that a new EU-Ukrainian trade relationship was a “reality.”

Ukraine has long been involved in talks to join the Russia-led Customs Union, but is also negotiating to sign a free-trade agreement with the European Union in November.

Azarov suggested that Russia and Ukraine should borrow fair-trade principles from the World Trade Organization, of which both countries are members, to work out a “practical algorithm and mechanism for interaction.”

The prospect of an EU-Ukraine economic pact has been a source of consternation for Russia. One fear is that European goods would enter Ukraine – free of import duties – and be re-exported at low prices to the Customs Union countries of Russia, Belarus, and Kazakhstan, flooding the market and harming domestic producers.

Ukraine’s EU free-trade deal might also be incompatible with membership in the Customs Union, threatening the country’s ability to fully join Russia’s effort at an economic coalition between the post-Soviet states.

As a result, Russia has been heavily pressuring Ukraine to scrap the EU agreement. It introduced rigorous extra checks on Ukrainian imports on August 14, causing massive backups at the border. Russian officials denied that the checks were political. The new restrictions were scrapped several days later, but not before spurring outrage in Kiev and talks of a supposed trade war. Russia also recently banned imports of sweets from a major Ukrainian confectioner, citing a range of "systemic violations" in their production process.

Ukraine still plans to go ahead with the EU deal, “barring all possible ultimatums, intimidation and nervous reactions,” Konstantin Yeliseyev, Ukraine’s ambassador to the EU, said at a recent European Parliament committee hearing in Brussels, in a clear reference to Russia’s recent economic tactics.

But as a compromise, Ukraine may seek to join partial agreements existing within the Customs Union – instead of joining as a full member – to optimize the trade regime with Russia.

Both Yeliseyev and Prime Minister Azarov emphasized Russia’s role as a strategic partner and spoke out in favor of reaching a constructive solution. But Russia, so far, has expressed unwillingness to conciliate.

Russian First Deputy Prime Minister Shuvalov said recently that Ukraine could not partner with the Customs Union and the EU at the same time after a meeting on Monday between Azarov and Russian Prime Minister Dmitry Medvedev. “We realized we did not see a compromise after we analyzed absolutely everything,” he told the Kommersant daily.

Russia has often been accused of using trade agreements as a political weapon against its neighbors. The administration just recently lifted a seven-year prohibition on Georgian wine and mineral water imports after a rocky period in Georgian political relations.